The Desert - hunter & wolfe - A Shadow of Jaguar - Oh Geronimo 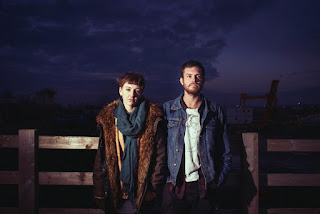 Background - The Desert is a collaboration between singer-songwriter Gina Leonard and guitarist & producer Tom Fryer. Tom’s atmospheric production style which plays with big spaces and other worldly sounds, lives in the space between Gina’s honest and poetic lyrics, allowing her songs to shine that little bit brighter.

The pair first met at the Cambridge Folk Festival in 2014 where Gina played a set for The People’s Front Room, a collective that Tom is a part of. Tom went on to record and produce a few of Gina’s tracks, however it wasn’t until late 2016 that The Desert officially came together to write and record their first collection of songs.

‘I find it difficult working with other people, it has always just been me and my guitar behind closed doors.’ Gina explains. ‘It was so exciting to find someone I could trust to develop my songs with. We’re pretty different but we work well together’  Facebook here.

We first featured The Desert back in early July & since then they have shared a video for 'Playing Dead' & this week have delivered 'Soulmates'. Three consistently good songs, where the atmosphere and natural feelings are in abundance, The Desert have something very special going on here. 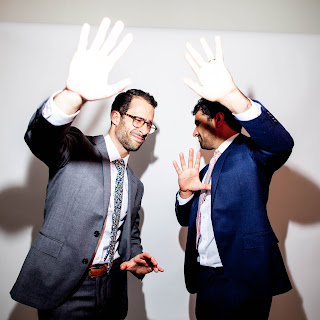 hunter & wolfe - All The Vultures.

Background - Brooklyn-based rock duo hunter & wolfe released "All The Vultures" this week. This is the first offering from the duo since the release of hunter & wolfe's 2014 full length LP Days And Works.

Late Then Never incorporates their signature singer-songwriter feel with an indie rock flare and a heavy dose of wordplay; it's about struggling to find meaning amidst the noise of modernity. Late Then Never features Doug Schadt (producer/engineer), Harper James (engineer), and Joe Lambert (mastering). The record will be available and will be distributed digitally by Spotify, Bandcamp, iTunes, and Google Play.

hunter & wolfe is comprised of Michael Maffei (vocals, guitar, piano), and Sundeep Kapur (guitar). Kapur and Maffei formed hunter & wolfe when visiting Chicago in 2011. In a (misguided) attempt to impress people, they jokingly introduced themselves as attorneys working at a law firm called "hunter & wolfe." Somehow, the pair ended up performing at a house party that night and decided to keep the name. hunter & wolfe draw inspiration from Radiohead, Elliott Smith, and Arcade Fire.

Brooklyn-based duo hunter & wolfe often wrap their vulnerable lyrical content in sarcasm and loud indie-rock stylings. In this, vocalist Michael Maffei and guitarist Sundeep Kapur ensure that their messages about complacency, lost love, and the paradox of choice in the modern era reflect both a seriousness and self-awareness to not take themselves too seriously. Website here, Facebook here.

'All The Vultures' is fresh, melodic and full of hooks. The duo create a rich & full rock sound, without over doing it and they leave plenty of room for some very fine vocals. 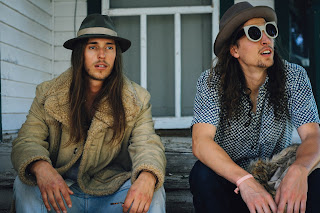 A Shadow of Jaguar - Don't Want To Die Here.

Background - New York City based gritty rock and rollers, A Shadow Of Jaguar, announce their debut LP RAW, due out October 2017. Speaking on "Don't Want To Die Here," the duo states, "Take your uppers and stomp on the gas because this loud, fast, near death experience will leave you needing a stiff drink and a happy ending." The video was filmed in one continuous shot with no cuts. This unique concept could not have been executed without the dance expertise of Cara Diaz Certosimo, who was recently featured in hip hop legends De La Soul’s latest music video, “Drawn” featuring Little Dragon. The filming of the video included the use of multiple cameras, three TV screens, a handheld projector, and a lot of rehearsing. The music video was recorded live with no edits. It is just as the album title suggests; RAW.

A Shadow Of Jaguar is a duo made up of Brian Hubbert (lead vocals, slide guitar, bass) and Andrew Oakley (drums, vocals). The duo found it's origins in their hometown of Boulder, CO, in 2015, where they sought to make music they weren't yet hearing on the rock scene. Debut singles "Mama Needs The Bottle" and "Keep On Knocking" were released to raves from AXS and Live For Live Music. Achieving their goal to add more grit into the rock scene, Live For Live Music writes, "In the modern musical environment where so much of our music is programmed to perfection, 'Keep on Knocking' is a much needed reminder that rock and roll is here to stay."

The forthcoming album RAW was made "to stick a big middle finger up at all the fears and doubts that plague us. The goal was to force upon people the uncontrollable urge to scrunch their faces and nod their heads" says the duo. The album was recorded, mixed and mastered in Denver, CO, by Todd Divel and Justin Peacock at Silo Sound (Borahm Lee of Break Science and Pretty Lights Live Band). A Shadow Of Jaguar also credits John Demitro, Vincent Ellwood, Emma Fields, Maggie Miller, Robbie Steifel for their efforts in making this album come to fruition. It will be released late October, 2017 on all digital platforms. Website here, Facebook here.

'Don't Want To Die Here' explodes into life with some full on riffs and rock'n'roll vocals to match. Potent, bold and spirited, just buckle up & enjoy the ride! 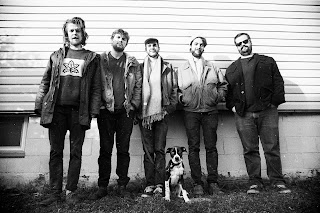 Background from Oh Geronimo - We just released our new single/video from our upcoming album The Sled. “No More Stones” is now available.

The song itself is about interpersonal strain. A relationship, whether it’s romantic or platonic, is an ongoing compromise that can get pretty messy when you toss both parties’ aspirations, promises and expectations into the mix.

We tried to bring this idea to life with the video. Relationships are like ropes - they become taut when people drift apart. Companionship is an emotional tug-of-war with unpredictable waves of tension and release. You constantly contemplate holding on or letting go. Facebook here.

'No More Stones' is an energised indie/alt rocker with powerful choruses and a real catchy vibe going on. The lyrics tell a story & the video is a clever interpretation of this.