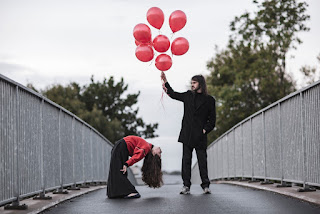 Background - Glasgow’s disco-pop duo Free Love (fka Happy Meals and consisting of Suzanne Roden and Lewis Cook) have announced their new EP ‘Luxury Hits’, due for release November 9th and shared a brand new single from the EP, ‘Playing as Punks’, out today. The duo have also announced their own run of headline shows in London, Manchester, Dublin, Belfast and Glasgow.

Since their seductive Euro disco-flecked single ‘Pushing Too Hard’ came out in late July, the duo have rounded off a busy summer of festival bookings with a live performance at Gottwood, Lovebox, supporting Django Django & Sylvan Esso at Edinburgh International Festival and a live 6 Music session for Vic Galloway (sitting in for Marc Riley) after Tom Ravenscroft made them his 6 Music Recommends. Their credentials as one of the best new live acts continues to go from strength to strength - they will be supporting James Holden and The Animal Spirits on a string of UK tour dates next week, starting at London’s Southbank Centre on 4th October, followed by their own run of headline shows which was announced today, then finishing off their fruitful year with a New Years Eve performance at the famous Edinburgh’s Hogmanay with Metronomy & Franz Ferdinand.

The duo’s new 8 track EP ‘Luxury Hits’, which features previous underground dance-pop favourites ‘Synchronicity’ and ‘Pushing Too Hard’, is an open-hearted love letter to possible futures. With the political continuing to linger beneath their dance party, the duo describe the EP as a “trans-temporal projection through pop music for dancefloors. The music is about breaking through the limitations of our surroundings, not through escapism but defining a new reality on our own terms and breathing it into existence.” Featuring 6 brand new tracks, the record is a tropical soup of sonic utopias - channeling balearic nightcrawlers, wistful acid drenched production, French vocals and glittering italo and synth-heavy rhythms - served in the mercurial bowl of here and now.

Free Love emerged in 2014 as Happy Meals from Glasgow’s renowned musical hub The Green Door Studio (the birthplace of other critically acclaimed DIY acts like LAPS, Golden Teacher, Total Leatherette and more). Their debut album Apéro on Night School Records was shortlisted for Scottish Album Of The Year in 2015, and was followed up by their second album last year, Full Ashram Devotional Ceremony, on Optimo Music. TWITTER.

Disco-pop is not a genre Beehive Candy has featured that often however 'Playing as Punks' is so wonderful how could we possibly ignore it. Actually this gorgeous song I would argue, goes way beyond any specific categorisation, it's warm, atmospheric, very catchy and imaginative. 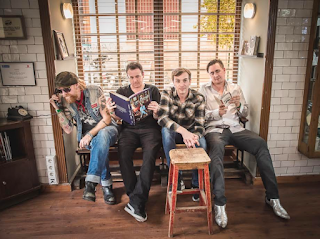 Berlin-based post-punk art rock band, Art Brut, are delighted to announce details of their new album, Wham! Bang! Pow! Let’s Rock Out!, which will be released on 23rd November via Alcopop! Records.

The record’s striking artwork comes courtesy of contemporary German pop artist Jim Avignon—a hugely respected cult figure in the art and Techno subculture in Berlin, he currently lives and works both in Williamsburg, Brooklyn and in Berlin.

Alongside the album, the band are also very pleased to announce a run of UK headline tour dates for February and March 2019. The band’s forthcoming London headline show at Boston Music Room on 7th November sold out in just 24 hours, and they play a further London headline show on 17th January at The Garage.

To celebrate the news the band have revealed the video for their new single ‘Hospital!’, in which a delightfully fragile ‘Eggy Argos’ traverses the pitfalls of modern life. It’s a stark juxtaposition with the deeply personal track for the band’s larger-than-life front man and huevo-namesake Eddie Argos who, three years ago, found himself dangerously ill in hospital. TWITTER.

More punk than post punk and more rock than art rock 'Hospital!' is a feisty and straight to the point song. Based on a real life experience where the patient hated every minute in hospital, deciding to change his lifestyle rather than return, in true punk tradition three years on, that whole lifestyle change thing is on the back burner again...