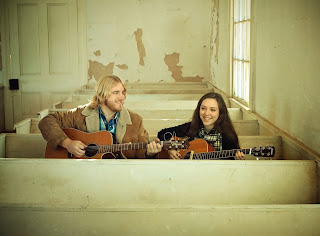 The debut album from back porch folk-soul duo Gibson Wilbanks, grants the listener privileged access to the romantic union of accomplished Atlanta-based musicians BJ Wilbanks and Carly Gibson. The 8-song release is a soundtrack to love that spans warmly engaging formative moments. The Gibson Wilbanks debut is refreshingly eclectic, yet is held together by elegant Americana songcraft, and a distinct sensibility that encompasses blues, Southern rock, classic R&B, folk, and touches of country. The pair have been favorably described as  “Gregg Allman meets Bonnie Raitt.”

The couple’s debut collection is an album-oriented release—available on Vinyl and CD—that’s sweetly seductive in that, from the first track, you’re compelled to listen to it in its entirety. If you’re in love, brokenhearted, or somewhere in between, the record’s broad array of earthy, love-soaked roots-rock songs will warm your heart, hitting that sweet spot between soul and country, showcasing Gibson Wilbanks gifts with textural layering and honeyed vocal blends.

BJ and Carly came together with already seasoned musical ability and careers. Carly is a graduate of AIMM’s (Atlanta Institute of Music and Media) guitar program and is a full-time musician, both with Mothers Finest as a background vocalist, as well as her rock band The Pussywillows.. BJ is also an accomplished musician with a prolific solo career, notching noteworthy press in American Songwriter, All Music and The Boot and has performed shows with notable bands Gladys Knight, Drivin N Cryin, and Mother’s Finest as well.

The couple first met eight years ago at an open mic. Initially, they admired each’s musicality, and resisted being a couple but started to hang and the creative chemistry was potent and intuitive. Gibson Wilbanks has performed regularly in Atlanta and the Southeast, sharing the stage with Sister Sparrow and the Dirty Birds, Ralph Roddenberry, Donna Hopkins, Caroline Aiken, and Diane Durrett, among others. The couple even launched a successful crowdfunding campaign towards the recording of their debut album. 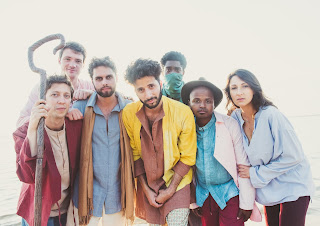 Sammy Miller and The Congregation - Shine.

"It was the middle of winter in New York and I was hauling my drums through snow sludge west on Grand Street," Miller recalls of the conception of the track. "I didn’t have gloves. As I was waiting for the M14 bus, I started to bounce from side to side, initially to keep me warm. I was cursing my life through hums, and at some point the chorus of 'Shine' popped into my head. Suddenly I felt lightness. I could hear the whole band in harmony — there was warmth, there was sunshine, everywhere I wanted to be. For a brief moment, I wasn’t cold."

Sammy Miller, a Grammy-nominated drummer for his work with Joey Alexander, convened The Congregation in 2014 at The Juilliard School in New York City where he was getting his master's in jazz. “When I was at Juilliard, I realized jazz couldn’t just live in a conservatory vacuum. It needed to provide its initial function of being an expansive creative outlet where the rules are there for you to break and improvisation went beyond notes and into an experience,” Sammy says. He soon found a cadre of jazz students who felt similarly—outliers who were fiercely individual on their instruments, but also craved a manner of expression beyond the solo. “We all went to Juilliard and have these credentials, but we didn’t like the insular feeling of the jazz scene. I wanted to find a new audience,” Sammy states. “We played in dive bars where people were scared of jazz.”

Their live show grew to be something of a mix between a comedy troupe and a dazzling rock band that played a vigorously reimagined strain of jazz. “We let ourselves be free on the bandstand and we took the audience with us,” Sammy says. The band’s boundless energy, inclusive ideals, catchy songwriting, and revue style presentation made them a word-of-mouth buzz band. The seven-piece group is a community of adventurous and charismatic superstar musicians who are conservatory-trained but who have not lost their childlike wonder and awe for playing music. The band lineup is Sammy Miller, drums and vocals; Sam Crittenden, trombone; Ben Flocks, tenor sax; Sammy’s sister Molly Miller on guitar; Alphonso Horne, trumpet; Corbin Jones, bass and tuba; and David Linard, piano.

The Congregation’s 9-song debut album Leaving Egypt was cut in four 16-hour days at the legendary United Studios where the many famed Count Basie sides were tracked. The band enlisted drummer extraordinaire Jay Bellerose (Alison Krauss, Ray LaMontagne, Robert Plant, B.B. King) to supervise and produce the proceedings. The debut represents a milestone for Sammy Miller and the Congregation’s creative continuum. It captures the group’s vulnerability, communal nature, charming and warm wit, and playfully virtuosic musicality. “This is us,” Sammy says of the album. “I’m proud of it, and I’m eager to embark on our mission to bring joy to people’s lives through music. 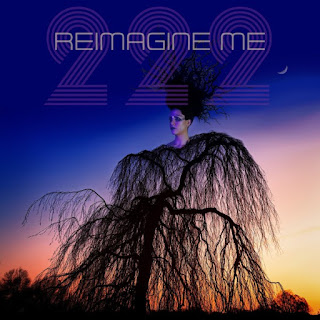 222 was formed in the summer of 2014 when Jade Howard and Dennis Hamlin after hanging out at a party one night decided to record a song for fun. The result of that night was the song “One Night Stand” and would go on to be their first release later that year. On 2/22/15 they self released their first album “Libretto”.

Their high energy live shows have built a strong following across the U.S. via a string of well-attended club dates. The band’s growing popularity is also due to airplay on influencer radio stations such as KROQ in Los Angeles. 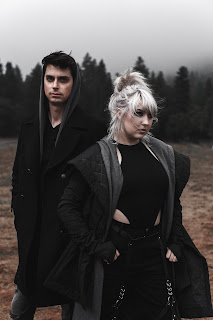 With winter approaching, Bad Wolf is giving all of the dark, romantic feelings needed to cuddle up this season with their remake of The Cure's "Love Song." The alt-pop duo is also releasing an intimate music video alongside the single.

Based out of Los Angeles, Bad Wolf Forges sci-fi, fantasy, and a touch of goth rock into a unique brand of alternative rock.

Dubbed by their fans as 'Fantasy-Rock,' Bad Wolf creates catchy yet thoughtful songs that bring a unique and imaginative edge to the indie rock genre. With over 1 million views on their YouTube channel, Bad Wolf prides themselves on creating unique visuals and stories to go along with their music.