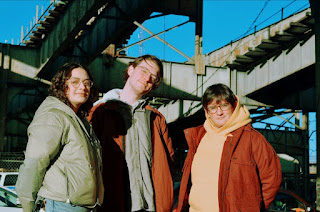 'Like a Stone', the new album from Philadelphia's Remember Sports, is all about breaking away from old versions of yourself. Vocalist Carmen Perry (she/her) rummages through feelings of doubt and spins them into an imperative to treat herself more kindly; her experiences growing up with Catholicism and later studying religion, as well as living with an eating disorder, provide a visceral lens for the literal blood-and-guts self-scrutiny she writes through.

With gated drums reminiscent of a naughties pop highlights comp, their third pre-release single, 'Out Loud,' is undoubtedly one of the album's standout moments. Vocalist Carmen Perry got to go "full Ariana Grande," guitarist Jack Washburn says of the diva-leagues vocal chops on display, “and the whispering she does on that last chorus is one of the most special moments on the record for me.”

The songs on 'Like a Stone' are about insecurity, but they’re also about optimism—emerging from an intrusive thought with a new way to perceive and care for yourself, represented in spectacular denouements made possible by the closeness between the band members. “We’ve grown up together and grown to trust each other,” says Carmen. In recording, Jack felt drawn to music that’s “communal and loud and cathartic, but also kinda confidential and private. I hope we achieved something similar, where you can hear the influence of each of us in the album.” Carmen seconds that; “It feels seamless. To me, Jack and Catherine’s writing feels like an extension of my own.” 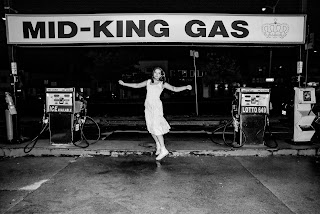 Last month Toronto's PACKS announced their debut LP Take The Cake, and their signing to Fire Talk Records (Dehd, Patio, Mamalarky) and Royal Mountain Records (Wild Pink, Alvvays, Mac DeMarco) who will release the record on May 21st. The album was announced with the single "Silvertongue," which caused considerable excitement, earning comparisons to Pavement, Sonic Youth and Best Coast from outlets like Stereogum, Exclaim and So Young, and best of the week nods from NPR, BrooklynVegan, Gorilla vs Bear and Paste. Today the band sharing their second single from the LP, "New TV."

"I got the chance to witness a craigslist transaction of two bros selling a hideous pink couch to an eager young man with a U-HAUL," Link explains. "As they lovingly demonstrated the LA-Z-BOY function, everyone seemed pretty impressed. New TV boxes and old couches litter curbs every garbage day. This song goes out to other people’s garbage." 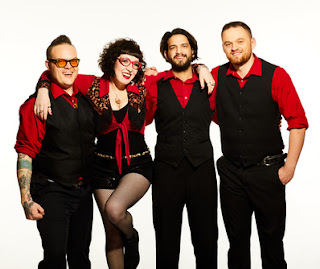 Ask anyone who’s caught them live and you’ll hear the same thing: It’s simply impossible to see Lara Hope & the Ark-Tones perform and not have a great time. A smile on the lips, a swivel in the hips, and an earful of snappy tunes are the inevitable takeaways from any Ark-Tones appearance. The band’s singular blend of rock ‘n’ roll, country, blues, surf, Western swing, rockabilly, folk, pop, and jazzy rhythm & blues gets feet a-moving and hands a-clapping no matter the audience. By the end of the night, if they weren’t already, those lucky concertgoers are rabid fans.

From behind her trademark red cat-eye frames, Lara, winner of the 2017 Ameripolitan Music Award for Best Female Rockabilly Artist, fills any hall that she and the Ark-Tones play. Her neon-bright, bigger-than-life persona is matched only by the outsized power of her towering voice, an instrument that moves effortlessly between big-stage belting and sexy, sultry crooning. Alongside Lara, the ace Ark-Tones know innately how to complement the leader and singer-songwriter’s dynamic vocal presence, both before an audience and in the studio: Double bassist Matt “The Knife” Goldpaugh, lead guitarist Eddie Rion, and drummer Jeremy Boniello keep the train rocketing down the rails, making moody detours whenever the songs call for them. Want an illustration of an act that knows its craft? Here to Tell the Tale, the band’s red-hot third album, is diamond-hard proof. In spades.

“Lara Hope & the Ark-Tones’ records and live performances capture, and release, the spirit of the original rockabilly and country bands that I have listened to and enjoyed for most of my life,” says Tony Garnier, Bob Dylan’s long-time bassist and a devout devotee of the group. “And my two boys, who are 10 and 13 and are [otherwise] glued to Top 40 radio, are also huge fans.”

Garnier is by no means alone in his praise for the quartet’s sound. “A beguiling chanteuse, Lara swirls with facility from sonorous swinging to purred intimations to powerhouse, knock-down-drag-out rock ’n’ roll,” says No Depression, while PopDose calls their music “a damned fine gathering of real, American rock ’n’ roll — the way it was meant to be played — with fun and passion.”

Although Lara and the group have been well known on the rockabilly scene for years, those who’ve followed their recordings know that the band’s stylistic approach is increasingly diverse. “Since our earlier albums [2014’s Luck Maker and 2017’s Love You to Life], we’ve grown a lot as musicians, and I feel like my songwriting has really matured along the way,” says Lara. “I believe that Here to Tell the Tale has our best songs so far. It’s more widely varied, in terms of the emotions, musical styles, and subject matter. We always try to have something for everybody.”