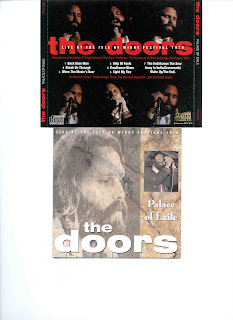 Known as 'Palace Of Exile' this bootleg is in a class of it's own.

The Doors played not long after midnight, whoever took the time to record this to such a high standard, and those who have ensured that the quality of the recording has remained until today deserve some thanks to say the least.

Considering this boot was recorded thirty seven years ago, it remains a fine quality recording, and really does justice to the highlight of that years Isle of Wight festival.

The art work in the picture contains front and back CD covers. I am not sure of the origins of these, and if they have any resemblance to the early vinyl boots in circulation, however Jim Morrison was certainly sporting the beard etc, at that time.

The gig was recorded live at the 3rd Isle Of Wight Festival at Afton Farm, Freshwater. Commencing at 12:05 am on Sunday, 31st August, 1970. This is a soundboard recording.

Anonymous said…
Thanks for all this nice music offer from the Radio Caroline days. I was listening to the dutch speaking Radio Mi Amigo during those days.

Is there any chance of reposting this Doors show at a little higher 192 kbps... but just if possible...

Thanks anyway for this nice blog

RevolutionaryBum said…
I've been Looking for this for awhile now and look forward to hearing it. Although I'm sort of bummed to see little or no songs from the last album [LA Woman] never was a huge fan of the Doors except the last LP witch I think captures something rarely ever caught on tape, Do you know if any live recordings of this time period exist ? Love to hear any if they do... Thanks for the re-up and all the other great posts.
8 May 2009 at 00:08