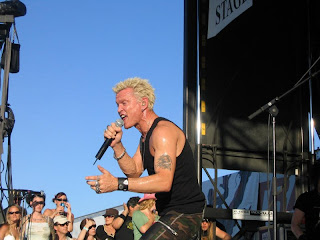 Time to up the energy levels!

The property consisted of 200 acres at the intersection of Higgins Road and Route 59.

When it opened in June 1980, the surrounding neighborhoods weren't exactly thrilled.

To appease them, the inaugural concert featured a very non-threatening John Denver.

By 1984 they may have got use to the venue being there. That said the whole place closed ten years later, maybe it took them that long to get over the 'rebel yell !'

This is Billy Idol recorded for a syndicated radio series at that time, so apologies for the appalling and 'quite cheesy' intro and the end 'really hip' DJ comments.

That said the actual concert is pretty nifty to say the least, and the sound quality is high standard FM stereo.

Adamoda14 said…
You are certainly right...Poplar creek has been closed for about a decade.
The property used to be considered the boondoks, but now it's pretty valuable.
But still rather far from Chicago.

Anonymous said…
Hi, the link is broken can you put the files again, thanks