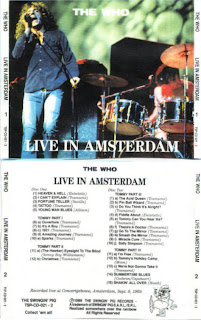 This one is special. The Who toured their then new album Tommy in the autumn of 1969, through to 1970, with gigs across the USA, and then on to the UK.

They started out in Europe, and this was the starting point.

Playing Amsterdam on the 29th September 1969, they featured some of their then best live material, and the whole of Tommy.

Pete Townsend seemed in a good mood, chatting to the audience a little, the whole performance was outstanding.

This was the original line up enjoying themselves:

I have used the cover of an early CD boot (silver disc) as the picture (click on to enlarge), however the recording I have uploaded is from another source.

The music source is stereo soundboard, professionally recorded and cared for since 1969.

Browse the Beehive Candy Store HERE, for some bargain priced The Who Cd's.
The Who

COPY THE LINKS IN FULL