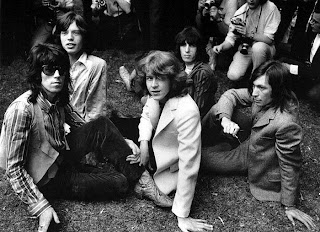 Welcome to Bootleg Originals number one, an occasional look back to some of the defining moments in rock bootleg history.

Bootlegs have been around for a long time, way before rock'n'roll, however this series will focus on the rock/pop era.

1969 tends to have tacit agreement, as the year rock bootlegs began to surface for sale, particularly in the USA. Bob Dylan is often regarded as an early 'target'.

Other obvious candidates were The Beatles, and The Rolling Stones. It was made easier when the Rolling Stones undertook a 17 date US tour, in November 1969, culminating at the notorious Altamont concert on December 6th.

The third date (two shows) on November 9th 1969, at The Oakland Coliseum in California, has been widely circulated as a boot.

It was the US 1969 tour, and the subsequent bootlegs, that lead to the official release of the 1970 Rolling Stones album 'Get Your Ya Ya's Out!' (predominately recorded from the Madison Square Garden concerts element of the tour).

This first bootleg in the series has been circulated under a few different names, the copy I received aptly named 'Liver Than You'll Ever Be'.

For a more detailed history of The Rolling Stones 1969, USA tour click HERE.

The sound quality is good - highly listenable - the rest is history!

REPLACEMENT LINK IN COMMENTS BELOW OR CLICK ON THE PICTURE (1st AUGUST 2009).

You can grab a little official Stones merchandise HERE.

Among some of the artists to follow in 'Bootleg Originals' you can look forward to Led Zeppelin, The Waterboys, Pink Floyd, The Grateful Dead, Santana, Bob Dylan, The Who and more, so if you have not done so, bookmark or even better, RSS feed this page!

(Many thanks to Chris for this recording...)
Bootleg Originals Series The Rolling Stones

Beehive Candy said…
REPLACEMENT LINK BELOW, COPY AND PASTE IT IN FULL: