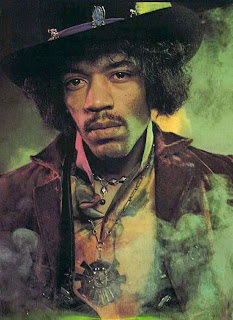 I was still a little to young to appreciate what Jimi Hendrix was all about at the time.

I guess by the time I started to really appreciate rock & blues music, Jimi was already a casualty.

My clearest recollection of Jimi Hendrix was seeing him performing live on Lulu's BBC Saturday night show 'A happening For Lulu' on January 4th 1969.

Fittingly this bootleg is from a performance just nine days later in Germany.

Part of the event was filmed and later featured as part of the German television program Beat Club.

In the evening The Jimi Hendrix Experience performed two shows with support 'Eire Apparent' at Studio Dumont in Cologne, Germany.

This then is one of those shows from the 13th January 1969. It is a very good quality soundboard recording.

FEED BACK ANY PROBLEMS

Anonymous said…
Thanks for sharing this Mike. Martin from Canada.
4 February 2008 at 01:54

Anonymous said…
hey thanks beehive, ya got some serious jams goin' on here.. dresden dolls i'm not so sure about, my twelve year old recently went to see them in t.o., said it was good, though, but hey, it's fresh! just like honey! two yums for jimi and there's a couple other fresh lobsters on here i'm gonna take a look at.. ride 'em high, cowboy... tex (also from ) canada.. land of hobos and hapless (chapless?!) cowboys.....
5 February 2008 at 00:21