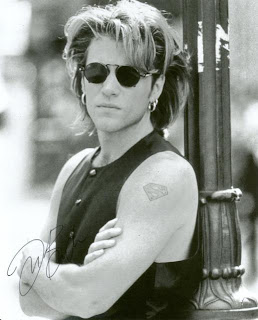 This is Bon Jovi live, back on the 29th June 1985, at the Milwaukee WI, Summerfest in the USA.

I had the pleasure of seeing Bon Jovi perform at the final concert at the old Wembley Stadium, London in 2000, prior to the place being demolished and rebuilt.

I was never a great fan of Bon Jovi however I was impressed on than night, and even if the show was a little bit 'show biz' rather than just rock'n'roll, it was easy to understand why they sell out stadiums with ease.

This boot, is from the period just prior to them hitting major success with their third album 'Slippery When Wet'.

The concert was I understand circulated as 'Get Ready' on the Japanese boot label Bondage.

This is an excellent recording, from the FM stereo broadcast of their show.