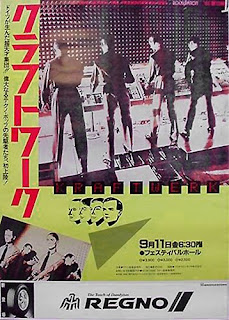 This is the second concert from Kraftwerk during their 1981 tour, to be featured on Beehive Candy.

The tour itself, was more or less divided into two parts.

The first tour started May 19th, 1981 at Apollo Teatro, Firenze in Italy and kept going until they had played in Bombay, India on September 25th.

Then they went back to Europe and enjoyed a small break until November 19th when they started a smaller tour with concerts mostly in Germany.

The last concert was held in the venue Zeppelin in Bremen, on December 14th. During the year 1981 Kraftwerk performed on more than 80 occasions in 16 countries.

This recording is from their performance in Tokyo, Japan at the Nakano Sun Plaza on the 7th September 1981.

It has been circulated I understand, as "Virtu ex Machina", and the set list (edited, however a large part of the show nonetheless) is as follows:

Beehive Candy said…
TO DOWNLOAD COPY AND PASTE THE LINK IN YOUR WEB BROWSER FOR THE FILE.