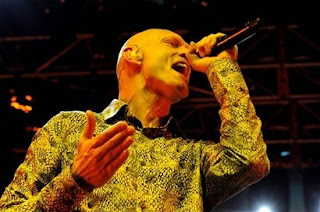 This is the second Midnight Oil live recording presented on 'Beehive Candy', this one a 'full on electric gig' that captures the band live in concert at The Wembley Arena, London, back in 1990.

Source: FM stereo recording from the Westwood One Show, broadcast on WHFS Annapolis, MD, USA, in 1990.

01 King Of The Mountain
02 Dream World
03 River Runs Red
04 Warakurna
05 Read About It
06 Read About It Cont.
07 The Dead Heart
08 Best Of Both Worlds
09 Kosciusko
10 Power and The Passion
11 Beds Are Burning
12 Bedlam Bridge, Forgotten Years
13 What's So Funny About Peace Love And Understanding
14 Hercules
15 Know Your Product
16 Blue Sky Mine

CANBERRA, Australia – Australia's environment minister swapped the political stage Thursday for one he trod in a former incarnation — as the country's loudest anti establishment rock star.

Peter Garrett, the front man for Midnight Oil, broke up the band in 2002 and pursued a career in politics that brought him into government just under two years ago.

But band members have come together to perform at a concert to raise funds for victims of Australia's worst wildfires, which killed more than 210 and destroyed thousands of homes in southern Victoria state last month.

Once known as champions of Aboriginal rights and the environment, Midnight Oil has not played a gig since their singer became a minister. Garrett has toed his Labor Party's center-left policy line, and tries to avoid questions about his former views.

Now, Garrett may have a dilemma on his hands because lyrics in some of the band's most popular songs do not fit comfortably within the political mainstream.

"Can Midnight Oil field 20 whole minutes of material that wouldn't get Mr. Garrett sacked if he were to read it out in Parliament rather than shrieking it while twitching violently to guitar music?" Sydney Morning Herald columnist Annabel Crabb wrote recently.

The band's 1987 breakthrough album "Diesel and Dust" called for Australia to be handed back to the Aborigines. U.S. and British imperialism were also favorite targets during the band's 26 years together.

They famously played an impromptu concert on a flatbed truck outside the Manhattan headquarters of Exxon Mobil Corp. in 1990 to protest the company's response to the ecological disasters caused by one of its tankers in Prince William Sound.

Standing six foot four inches (193 centimeters) tall and with a head shaved bald as it was throughout his music career, Garrett still stands out from his government colleagues even when in a gray suit and tie.

Garrett has insisted there will be no compromise on the play list.

"We won't be choosing songs on the basis of whether or not they're considered by political commentators to be political songs or not, we'll play songs for the fans," he told Australian Associated Press Wednesday.

Gary Morris, a longtime manager associate of the band, said Thursday there will be no satisfying some fans who contend the songs will have been picked specifically to keep the government happy.

The band opened a warm-up concert Thursday with the uncontroversial "Redneck Wonderland" from the 1998 album of the same name and Garrett played harmonica for a rendition of "Blue Sky Mine," a song about asbestos miners suffering lung disease.

Midnight Oil will perform another warm-up Friday. Two big concerts take place Saturday — one in Sydney, with Coldplay headlining, and the other in the Victorian capital of Melbourne, featuring Garrett's band.

Garrett's new career has created some friction with the band. Instead of rehearsing in Canberra on Wednesday, Garrett was representing Australia at coral conservation talks in Papua New Guinea.

Morris said that when he had recently protested about the double-booking, Garrett had replied: "I don't work for the Oils anymore. I work for the Australian government."

"I used to be able to persuade him after about an hour of discussion to do various things that he was reluctant to do, but when he pulled that line on me, I couldn't beat that one," Morris laughed.

Garrett flew into Canberra on Thursday morning and attended the final session of Parliament for the week before making the short journey to the theater.

Thursday's concert was the first time he has sung in public since 2005 when the band performed at a fund raiser for victims of the 2004 Asian tsunami.

Beehive Candy said…
For single files, it's a whole lot easier just clicking on the photo/picture to go to the download link.

Otherwise, and if you prefer copy and paste the following:

Your comments are always welcome