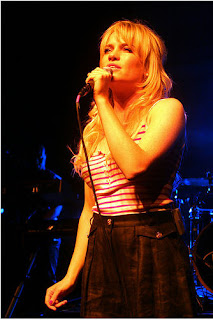 This is the excellent Welsh singer-songwriter Duffy live in concert at The Quasimodo, Berlin, Germany, and broadcast back on the January 21st, 2008.

Her 2008 debut album Rockferry entered the UK Album Chart at number one, and was the best selling album in the UK in 2008 and has sold over 5.5 million copies worldwide.

In 2009 she won three BRIT Awards, British breakthrough, Best female solo and Best British album. She also won a Grammy Award in the category Best pop vocal album for Rockferry, and she was nominated for two other Grammy awards.

Duffy was the first Welsh female to achieve a number one pop single in twenty-five years with her second single 'Mercy' which also happens to be the most played song on radio and in restaurants and bars in the United Kingdom in 2008.

Comments: The Quasimodo is Berlin's oldest Jazz Club, and one of the most renowned places for live music in Europe.

Quoting from the club site 'The club presents itself in a very conservative way, suitable for a "real" jazz club: The Quasimodo is a "jazz-cellar" in the sense of the word - situated under the Quasimodo-Café and the Delphi-film-palace. - Here you can of course listen to "down to earth" jazz music played in a traditional way - but besides this the club is also open for various other styles of music: funk & soul, Latin, blues, rock and more are equally at home on this stage'.

This is a great set from an outstanding performer, enjoy.

Slidewell said…
At first I thought Duffy was a Amy Winehouse wanna-be. WRONG! Great voice, great songs. Thanks for this, and THANKS for using Mediafire!
17 June 2009 at 19:23

Chris said…
Thank you for this - and thanks for bringing your blog back to life! I second Slidewell's thanks for using Mediafire.
22 July 2009 at 10:59

Chris said…
Hmmm. It seems that I've been away from your blog for a long time - I've noticed you've been posting again since Christmas! Shows how often I visit my bookmarked favourites...a belated thanks then for coming back to blogging!
22 July 2009 at 11:03