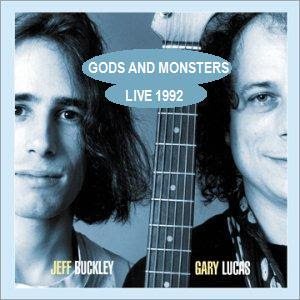 By 1988 Gary Lucas was making a name for himself in New York as a solo artist having left Captain Beefhearts Magic Band some years earlier.

Having written 'Grace' & 'Mojo Pin' with Jeff Buckley in 1991 Jeff began performing with Gary Lucas in his band Gods And Monsters.

As has been mentioned on the previous Jeff Buckley post, days after Gods and Monsters officially debuted in March 1992, Jeff Buckley decided to leave the band.

In October 2002 Gary Lucas released 'Songs To No One' an album of material from studio sessions, home tapes, and club performances over two years of collaboration between himself and Jeff Buckley.

The final track on that album 'Grace' was from a live performance at the Roulette Club in New York. This is the full set recorded live at Club Roulette, New York on the 5th April 1992.

Gary Lucas remains a highly regarded guitarist and continues to tour with 'Gods and Monsters' playing what they describe as intense psychedelic rock avant rock and art rock.