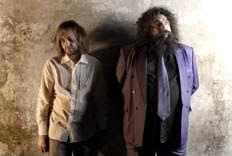 Now I like quirky and different, and mention the likes of the Bonzo's or Monty Python and my 'musical radar' tends to activate! Patrick and Eugene are yet another reason to keep an eye on whats new in the world of music, especially in these troubled times where record companies are inclined towards nicely packaged conformity or well controlled and marketable rebels.

The UK press has stated "Banjos, bongos and alarm clocks, '20s jazz and '60s pop and sampled insect noises, Patrick & Eugene's irrepressibly eccentric summer romp has got it all." - NME

The Patrick & Eugene sound is comprised of banjos, ukuleles and sunshine pop vocals combined with whistles, bells and bongos to produce unique but accessible music for post-modern vaudevillians, with nods to Monty Python, Derek & Clive and even Woody Allen. Try to imagine Noel Coward on stage with the Duke Ellington Band at the Monterey Pop Festival and you’re getting close.

The album’s title track is currently being featured in a year-long TV campaign by Payless Shoes, and has been heard over the end credits of ABC’s Weeds and in Grey’s Anatomy. The opening song “The Birds & The Bees” got enormous exposure via a very successful VW Rabbit TV advertising campaign a couple of years back and the YouTube comedy hit “To Do List.” Patrick & Eugene’s songs have also appeared in the Coen Brothers’ Burn After Reading and the Mr. Bean trailer.

Their PR adds: Patrick Dawes (who found fame playing percussion for Groove Armada and Richie Havens) & Eugene Bezodis (who is infamous for setting fire to Patrick when one of his on stage magic tricks went horribly wrong) are two talented originals. Combining stellar musical ability, devil-may-care delivery and an innate desire to entertain, the duo's recordings and live performances are delivered with a passionate amateurism that belies their virtuosic talents.

Highlights from the band’s previous releases Postcard From Summerisle, and Everything And Everyone include impious but infectious versions of Beyonce’s “Crazy In Love”, Simon & Grafunkel’s “59th Street Bridge Song” and The Arctic Monkey’s “I Bet You Look Good On The Dancefloor.” Their imaginative reworking of Kylie Minogue’s “Can’t Get You Out Of My Head” is included on Altogether Now (Birds Bees Flowers Trees).

Their last album was picked by Paul Heaton (The Beautiful South & The Housemartins) as his choice for the months 'Buried Treasure' feature in Mojo magazine. He described it as the "wild and comic sound of inner-child music and movement” and admitted that this was The Beautiful South’s favourite album to take the stage to!

Altogether Now (Birds Bees Flowers Trees) is the U.S. debut release from the UK’s Patrick & Eugene. The album was produced by band member Patrick Dawes and it’s being released by the Tummy Touch Music Group, distributed by ADA/WEA.