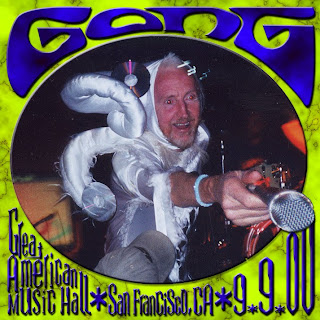 Currently touring in Europe with the original line up, Gong continue to amaze audiences with their musical tales of Pot Head Pixies, Gnomes, Zero The Hero and more.

Going back to the beginning of the 'noughties' decade and Gong were continuing to tour worldwide on a regular basis.

This recording is from the 9th September 2000 at the Great American Music Hall, San Francisco, California.

This is a full concert and features quite a lot of material from the 1970's era of the band. Gongs latest album '2032' was released in September this year.

After spending most of the Eighties in his native Australia, Daevid Allen returned to the UK in 1988 with a new project, the Invisible Opera Company of Tibet, whose revolving cast included the likes of Harry Williamson, violinist Graham Clark and Didier Malherbe. This morphed into GongMaison and by 1992, the name Gong was again in use, by which time early drummer Pip Pyle had also rejoined. The band released the album Shapeshifter (subsequently dubbed Radio Gnome part 4), followed by extensive touring. In 1994, Gong celebrated its 25th birthday in London, including a performance by most of the 'classic' line-up, including the returning Gilli Smyth and Mike Howlett. This formed the basic of the "Classic Gong" band which toured worldwide from 1996 to 2001 and released Zero to Infinity in 2000 (by Allen, Smyth, Howlett and Malherbe plus new recruits Theo Travis and Chris Taylor).

Thanks for this 2000 Gong gig - I've just had a really quick listen and it sounds like a great, well-recorded concert.

But track 4 seems to be broken (I tried downloading everything twice, with the same results).

Any chance of a re-up, or, preferably, posting track 4 separately ?

Thanks from me too. And the same problem with track 4.

And a little slip in the tracklisting: "zero the hero..." is split into tracks 5 and 6, so the following tracks are all tagged wrong until track 14, where "get it inner" and "master builder" are joined.

Konrad Useo said…
Thanks much.I know naught of them & want to check them out before purchase.
A pal advised me to try them.
10 November 2009 at 05:44

SHOULD WORK THIS TIME!

Thanks very much for sorting out Track 4, which all seems to be in working order.