Showing posts from December 6, 2009
Show All 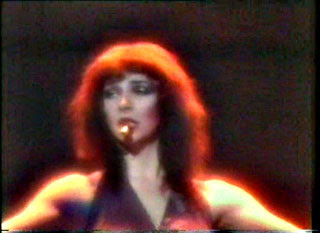 'The Tour of Life' is the only ever tour by Kate Bush . During the 1979 tour, Kate became the first ever singer to use a wireless headset radio microphone on stage, which enabled her to incorporate extensive dance routines into her live shows. A number of reasons have been suggested as to why she subsequently abandoned touring, among them her reputed need to be in total control of the final product, which is incompatible with live stage performance, a rumour of a crippling fear of flying, and the suggestion that the death of 21-year-old Bill Duffield severely affected her. Bill Duffield, her lighting director, was killed in an accident during her 2nd April concert at Poole Arts Centre. Kate Bush held a benefit concert on the 12th May , with Peter Gabriel and Steve Harley at London's Hammersmith Odeon for his family. The tour comprised of 28 dates including five nights at The London Palladium. This is from her concert at the Carr'e Theatre in Amsterdam, Holland on
8 comments
Read more

If I have some new music that I want to listen to I expect I am not alone in listening whilst doing something else like surfing the net or whatever. The Morakestra were playing in the background yesterday and I was trying to write an article and in the end I had to turn them off. Not because there was anything wrong, quite the opposite actually as they are so catchy, tuneful, and full of great guitar hooks and songs that they became a total distraction. Which of course is a joy as I love those moments when you realise you are listening to something that connects home. OK the band themselves have been around for a while, indeed their web site adds 'F ounders and key creative minds David and Will Mora are twin brothers who were proudly born and raised in the West Texas border city, El Paso, Texas. Fellow El Pasoan Jim Ward contributed to the rebirth of Morakestra via production and recording of the band's latest album, Witness to Connection, out June 2nd, 2009 on indie label S
1 comment
Read more 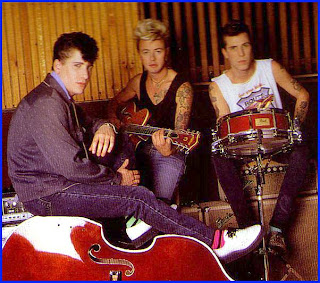 Are you ready to rumble? There is nothing like a blast of rockabilly and a blues belter or two, to clear the cobwebs and the Stray Cats certainly know how to liven things up as was the case here back in the early 1980's Now I am a little confused over the venue or even city that this gig was actually from. The silver disc boot says the band were live in Los Angeles on April 28th 1982. It's just that the song 'Rumble In Brighton' keeps on having the lyrics changed to 'Rumble in Toronto' something the audience seems to appreciate. That aside this is one rocking concert from the band at the peak of their musical journey. It's not until 'Lonely Summer Nights' that the band slow things down a little, showing how well they could recreate 1950's rock'n'roll in differing styles. Source: Soundboard. Sound Quality: Very good stereo mp3@320kbps. Genre: Rockabilly. Set: Full Set. Set List: 1. Baby Blue Eyes (4:22) 2. Double Talking Wom
4 comments
Read more 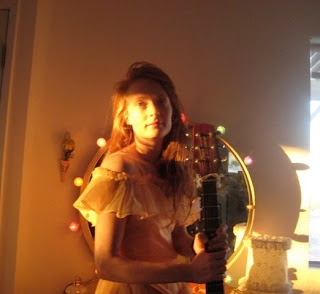 We are reliably informed that Daisy McCrackin was born in San Francisco and now lives in Los Angeles. So what else can I add, well having read her bio on MySpace her original move to LA was to develop an acting career, with some notable Hollywood credits to her name including 3000 Miles To Graceland (with Kurt Russell and Kevin Costner.) She also had the honor of being one of Michael Myers teen victims in a Halloween sequel from 2002 (no wonder she switched over to a music career), however clearly her artistic yearnings eventually led her away from LA for a while as she slowly developed her song writing and guitar skills. Having listened to her debut release 'Rodeo Grounds' I have to say there is something special about Daisy and her music. I would imagine she will appeal to both folk and indie fans alike, the comparisons are there (from Joni Mitchell to Beth Orton) however she has a unique and very intimate style that has a personal and charming edge. Listen: 'tell
3 comments
Read more 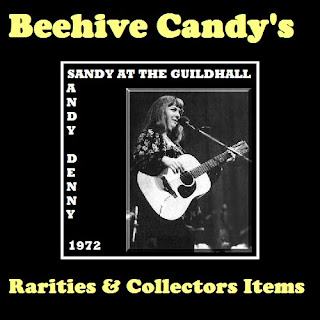 This is the second in our new occasional series under the banner 'Rarities and Collectors Items' where the audio might not be first class but the interest factor is likely quite high. It's over thirty years since Sandy Denny passed away, and yet her influence as a folk singer and artist has remained down the years, her ability to interpret anything from traditional folk too folk rock setting the benchmark for those that have followed. This is a beautiful set recorded by a member of the audience who edited out the gaps and some applause however retained her conversation with the audience along with the songs. Being a small venue and with a respectful audience the intimate nature of the concert can be felt and heard. Performing on October 12th 1972 at the Guildhall, Newcastle, England this is the much missed Sandy Denny. Source: Audience recording Sound Quality: Very good for audience recording and era mp3@320kbps. Genre: Folk, Electric Folk. Set: Majority of
5 comments
Read more 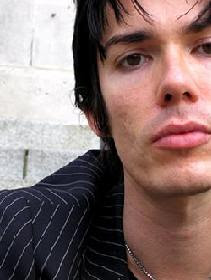 Julian Shah-Tayler is a solo artist who writes, produces and performs his own music. His EP - "Un Ange Passe" (dedicated to the memory of Christine Shroy-Hull) is released on 1st January, 2010. His debut album, “Coito Ergo Sum” is due for release spring 2010 on Impossible Thing Records. Julian has played guitar in 'Whitey' co writing the smash hit “Wrap It Up” which has been featured in Whip It, GTA 4, Sopranos, Kyle XY and CSI Miami. He has also played keys & sang with Siobhan Fahey (Shakespear’s Sister), and played keyboards & sang on Joaquin Phoenix’s solo album among others! Having listened to a number of his his songs, I reckon he could well break through in 2010, which would be deserved as his song writing and performance is quite stunning. The melodies and variety of styles he uses along with first class production have really gained my attention. Listen: 'Communication' Websites: MySpace Buy: Impossible Thing Records The debut solo EP
Post a Comment
Read more
More posts