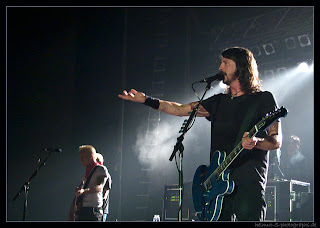 The Foo Fighters are another one of those bands that have been around for a lot longer than it seems (for me anyway). Formed in 1995 by Dave Grohl originally as a one-man project after the dissolution of his previous band, Nirvana the Foo Fighters have of course gone on to stadium filling, Grammy award winning super group status.

What would have been if Dave Grohl had accepted a permanent position as the drummer in Tom Petty and the Heartbreakers back in 1994 (he very nearly did). This is The Foo Fighters live at the Reading Festival (England) back on the 24th August 2002, and the recording comes with an additional four songs performed by the band on BBC TV's 'Later With Jools Holland' from November 2002.

If you need one, the Nero Music player can be downloaded HERE.