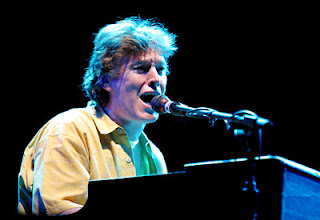 This is Steve Winwood during his first 'High Life' solo American tour. The concert was recorded by Westwood One (for the Superstars series) and has circulated as a bootleg, both as a double vinyl album and silver disc CD.

It is also sometimes available in slightly more legitimate forms as a Westwood One radio disc through dealers of radio shows who advertise in collector's magazines.

This is the most complete version of the concert I have been able to obtain and runs as a 45 minute single track. Although it has been circulated as recorded in 1986 it is in fact from a concert at the Blossom Music Center, Cleveland, Ohio, USA in 1987. Audio quality is extremely good.

Constant artistic differences and personnel changes led to Traffic's final break-up and Steve Winwood's release of his self-titled first solo album in 1977. This was followed by his 1980 hit Arc Of A Diver and Talking Back to the Night in 1982. Both albums were recorded at his home in Gloucestershire with Steve Winwood playing all instruments.

Steve Winwoods first solo tour in the US had Low Spark as the opening number with him playing alone on the piano, before he counted the rest of his band in, for a stomping version of Glad.

Anonymous said…
Sorry no we do not have a FLAC lossless version.