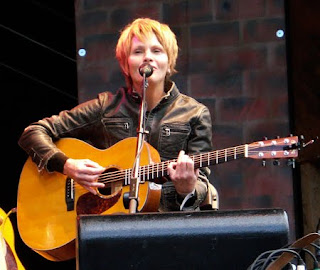 This is Shawn Colvin performing live at The Mann Theatre, Philadelphia, PA, USA back on the 9th August 2001. Shawn was the Opening act for Lyle Lovett (who duets with her on one song).

Shawn learned to play guitar at the age of 10. Her first public concert was at age 15 at the University of Illinois campus. Shawn cites Joni Mitchell as a primary influence on her music, and her initial performances reflected that.

Shawn Colvin experienced breakthrough success with A Few Small Repairs in October 1996. The single "Sunny Came Home" reached the US Top Ten, and won Grammy Awards for Song and Record of the Year. She has released several subsequent albums which were nominated for Grammys, and she has also released a greatest hits album.

01 Anywhere You Go
02 talk
03 Trouble
04 Shotgun Down The Avalanche
05 Somewhere Over The Rainbow/Doe-A-Deer (with her daughter, Callie)
06 Polaroids
07 talk
08 Wichita Skyline
09 A Matter Of Minutes
10 Whole New You
11 The Facts About Jimmy
12 Diamond In The Rough
13 The Only Living Boy In New York

From Wikipedia: Shawn Colvin began working in the music scene in earnest in the late 1970s, first in Austin, Texas and then nationally. She moved to New York City in 1980, where she became involved with the Fast Folk cooperative in Greenwich Village.

She met music partner John Leventhal during this time; Leventhal became Colvin's producer on several albums. Colvin often lends her talent to contemporaries in the music business; she can be heard singing the backing vocals on the Suzanne Vega hit, "Luka". Vega returned the favor, singing backup on Colvin's "Diamond In The Rough", from her debut album, Steady On. Early in their careers, Colvin and Mary Chapin Carpenter formed a friendship that led to their frequently guesting on one-another's recordings: Colvin lent her vocals to Carpenter's 1992 recordings "The Hard Way" and "Come On Come On", and Mary Chapin returned the favor on Colvin's "Climb On a Back That's Strong", from Colvin's Fat City album. She also contributed in the studio and onstage to several Bruce Hornsby songs.

In 1988, Colvin was asked to perform a "trio" concert with fellow folk singer/songwriters Cheryl Wheeler and Mary Chapin Carpenter. The three performed two consecutive nights to critical acclaim at the Birchmere in Alexandria, Virginia. During these performances, Colvin performed several songs which appeared on her first two albums. The performances were recorded at the soundboard, although never released officially.

Shawn Colvin also has connections with singer/songwriters Julie Miller and Buddy Miller. Shawn became involved musically with the Millers when all three were working in Austin in the late 1970s/early '80s. Shawn provided backing vocals on Julie's first three solo albums (now out of print) released in 1990, 1991 and 1993.

Shawn olvin's first several albums did not sell in substantial numbers. After several albums of original work, Colvin released Cover Girl, a collection of cover versions. During this period, she also toured as Richard Thompson's opening act and back-up singer. She also sang "I Don't Want to Live on The Moon" with Ernie on Sesame Street, Ernie sang when Colvin said "hi" to him.

Anonymous said…
THANK YOU THANK YOU THANK YOU!! And God bless your Beehived little souls. I am Shawn Colvin's biggest fan ever in the history of the universe, and it is VERY difficult to find boots/roios/etc. Mucho appreciatado. -jrsfarm-
20 February 2010 at 14:36