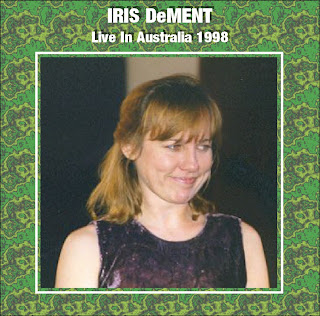 This is Iris DeMent at the East Coast Blues and Roots Festival, Red Devil Park, Byron Bay, NSW, Australia back on April 10th 1998. The performance was subsequently broadcast on national radio on June 14th 1998.

Iris DeMent's songs are typically simple, clearly told stories about life's pains and joys. She at times sounds a little like Dolly Parton and occasionally like Emmylou Harris. The songs are superb and in this performance she uses just guitar and piano, which makes for an intimate personal feel.

This is the sort of country music I can enjoy, clear of stereotypical songs and falseness, rather just plain simple heartfelt songs stripped back and very roots orientated.

Her first album, Infamous Angel, was released in 1992 and explored themes like religious skepticism, living in a small town, lamenting "nothing good ever lasts", and forgiving human frailty. Her song "Let the Mystery Be" from that album has been covered by a number of artists, including 10,000 Maniacs and Alice Stuart, and has become one of Iris DeMent's better known compositions. In her second album, My Life, released in 1994, she continued the personal and introspective approach. My Life was nominated for a Grammy in the Best Contemporary Folk Album category. Iris DeMent's third album, The Way I Should, was released in 1996. Featuring the notable "1 Wasteland of the Free", it is DeMent's most political work, and covers topics like sexual abuse, religion, government policy, and Vietnam. After a hiatus during the late 1990s and early 2000s, she released her fourth album, Lifeline, in 2004.

She gained some notice singing the Merle Haggard song, "Big City", on Tulare Dust: Tribute to Merle Haggard, a 1994 various artists tribute album. In 1995, her song "Our Town" was played in the closing moments of the last episode for the popular CBS TV series Northern Exposure, gaining DeMent more fans. (The song has also been recorded by Kate Rusby, Jody Stecher, and Kate Brislin.)

Iris DeMent has sung duets with John Prine (on In Spite of Ourselves), Steve Earle and Emmylou Harris and is featured on the albums of many other performers. She has made frequent appearances on Garrison Keillor's A Prairie Home Companion, and appeared in the 2000 film Songcatcher, playing the character Rose Gentry and singing on the soundtrack as well. In 1994, Natalie Merchant of 10,000 Maniacs performed DeMent's song "Let the Mystery Be" with David Byrne for the show MTV Unplugged. The song was included on Campfire Songs: The Popular, Obscure and Unknown Recordings.

Iris DeMent was the inspiration for the name of the Goo Goo Dolls song, "Iris", after guitarist/vocalist John Rzeznik found her name while flipping through Billboard magazine in an article written by Daniel Levitin.

manfred said…
yron bay is one of the amazing holidaying destinations for surfing , shopping stuff as well as awesome food and Byron bay luxury accommodation… You can really have great experience by staying there … I uses go with my family every year… that’s really great place…

Anonymous said…
Having all the official stuff (including a rare and expansive CD-single from Germany) and a couple of booted shows I found this one a notable addition. Thanks a real lot - and: let the mystery be.
29 April 2010 at 20:21

Anonymous said…
Your comments should mention that Iris is now married to another famous country-folk singer songwriter -- Greg Brown. It's mystery why they haven't done duets.
30 April 2010 at 16:38

Thanks for upping this one, I hadn't heard Iris before. Wonderful stuff, have just spent several enjoyable hours on Spotify catching up with Iris's albums.

ronald eddy said…
Beyond expectations was the stated objective of The Villas of Byron from the outset. Byron Bay is truly a destination for all seasons because of these lovely temperatures and the beautiful environment.
11 July 2010 at 07:47

Anonymous said…
I stumbled on this while researching Iris's brand new album. (Sing the Delta - it's brilliant.) I was there at Byron Bay. It was an afternoon show, to a small but devoted/appreciative/spellbound audience. (The huge Mojo tent holds a standing audience of maybe 7,000. Iris was playing to probably 300 fans at the start of show, maybe 500 hundred when she finished. She was utterly engaging, in good voice, a little nervous, and seemed surprised that she had there were people at the other end of the Earth who knew and loved her music.
4 November 2012 at 08:17