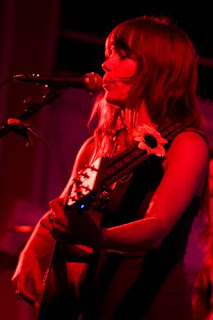 As mentioned in The Watson Twins feature, the pathway that led Beehive Candy to the twins was through Rilo Kiley and their lead singer Jenny Lewis.

It's notable that performing as a solo artist Jenny has an alt country feel that is quite different to the music of Rilo Kiley, and demonstrates another dimension to her musical talent.

Occasionally we feature audienced sourced material here, provided the audio quality is very clean and does the artist and the concert justice, which is the case with this recording.

Recorded live at the Plaza Theater, Orlando, USA, last year on the 29th June this is a really good concert from Jenny Lewis.

In 2004, Conor Oberst of Bright Eyes invited Jenny Lewis to record a solo record for record label Team Love. Described by Jenny Lewis as "a kind of soul record", Rabbit Fur Coat (released January 24, 2006) features contributions from Oberst, M. Ward, and Maroon 5 guitarist James Valentine. Ben Gibbard of Death Cab for Cutie (and Lewis's bandmate in The Postal Service) guests on a cover of The Traveling Wilburys' "Handle With Care."

In 2008, Lewis released a second solo album, this time without the Watson Twins, titled Acid Tongue.

Thanks for the great posts!