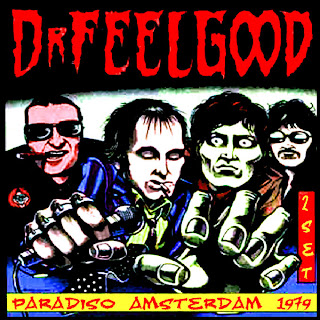 This is Dr Feelgood performing at the Paradiso, Amsterdam, Holland back on the 5th October 1979.

The recordings may have been broadcast on a number of occaisions and we understand these are from KRO's Rocktempel and featured in November 1986.

It is likely that the order of material reflects the first and second sets at their appearance at the Paradiso which was one of seventeen venues played in Holland during October 1979.


Hailing from Canvey Island, Essex, the band are best known for early singles like "Back in the Night" and "Roxette". Although their most commercially productive years were the early to mid 1970s, they continue to tour and record to this day.

Like many pub rock acts, Dr. Feelgood were known primarily for their high energy live performances, although studio albums like Down by the Jetty (1974) and Malpractice (1975) were also popular. Their breakthrough 1976 live album, Stupidity, reached number one in the UK Albums Chart (their only chart-topper). But after the follow-up Sneakin' Suspicion, Johnson left the group due to perceived conflicts with Lee Brilleaux. He was replaced by John 'Gypie' Mayo. With Mayo, the band was never as popular as with Johnson, but still enjoyed their only Top Ten hit single in 1979, with "Milk and Alcohol". Johnson never achieved any great success outside of the band and fans always speculated about a return by Johnson that never occurred.

Disclaimer.
Please note that this comes from a tape that was already more than 20 years old at the time of transferring.
This means that some FM and/or tape anomalies or degeneration may be present.
No equalization or sound manipulation has been done to this recording.

The original recorder and uploader.