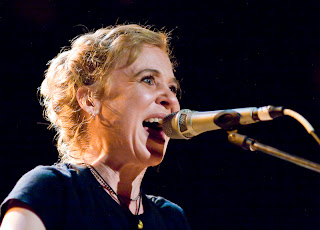 Internet Archive Replacement - We only tend to feature audience sourced recordings that are rare, collectors items, or very good in terms of audio quality.

This is Kristin Hersh live at The Bowery Ballroom, New York, NY on the 25th April 2007.

In terms of the above statement this is a very good quality audience recording with very little audience 'noise' between songs and a good level and clean overall sound that captures all elements of the show. I guess it is also a collectors item for any fan of Kristin, it's a cliche we probably use to often here at Beehive Candy, but you won't be disappointed.

This was the first show on the North American tour to feature the advertised string section of The McCarricks. They had suffered unforseen visa problems and finally flew into New York during the day of the show and after performing their own opening set, they performed along with Kristin, the resulting additional dimension to the music is stunning.

The tour was in support of the 2007 album release 'Learn To Sing Like A Star' and the concert includes seven songs from that album.

Born in Atlanta as Martha Kristin Hersh, she was raised in Newport, Rhode Island. She learned guitar at age nine from her father, and started writing songs soon after. As a teenager, she formed Throwing Muses in the early 1980s with stepsister Tanya Donelly and other high school friends.

Kristin Hersh began singing and writing most of Throwing Muses songs in changing tempos, with Tanya Donelly also singing and writing some of the songs. The group was signed by the British 4AD Records label in 1986 and, after one album, signed a U.S. deal with Sire/Reprise Records in 1987. They began touring around the U.S. and Europe while recording critically-acclaimed rock albums, with Kristin Hersh writing most of the songs.

In 2003, she formed a power rock trio called 50 Foot Wave, when Throwing Muses drummer David Narcizo was unable to tour on a full-time basis due to other commitments. Her touring appearances and recording efforts in 2004 and 2005 centered around both 50 Foot Wave and her solo career.

Kaggsy said…
Thanks for this! Have loved Kristin's work since early Muses days so I'm looking forward to hearing this - keep up the great work!
24 October 2010 at 11:22

The Rich said…
As Flaming Carrot would say, "Oot!"

Thanks very much for this. This will go straight onto my non-branded, non-format-specific, portable music player.