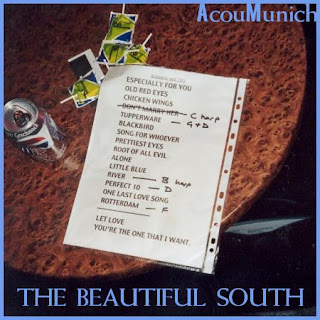 This is The Beautiful South performing an acoustic concert on the 29th November 2001 at Boeblingen, Munich, Germany. The concert was subsequently broadcast on Bayern 3 (3rd December 2001) and WDR2 (20th January 2002). Paul Heaton, Dave Rotheray and Dave Hemingway are all performing, I am not sure if any other members of the band were involved. The band were supported on the German gigs by a young German band called 'Lost In Venice' from Stuttgart. The Beautiful South formed at the end of the 1980s by two former members of Hull group The Housemartins, Paul Heaton and Dave Hemingway. The duo were initially joined by Sean Welch (bass), Dave Stead (drums) and Dave Rotheray (guitar), all of whom stayed with the group throughout their 19-year career. Later additions included female vocalist Briana Corrigan; she was replaced by Jacqui Abbott, who in turn was replaced by Alison Wheeler. The group broke up in January 2007, claiming the split was due to "musical similarities&
2 comments
Read more

We have been swamped again by new music these last couple of weeks, and there are just so many good songs to cover, so we are doing this edition of 2010FM a little differently. Quite a few singer songwriters in this edition however once again we are covering alot of different styles and genres, all in our opinion worthy of a feature to say the least. First up is Tristen from Nashville, who has been compared to Jenny Lewis and has a really nice mix of folk, pop and rock in a distinctive and "wanna hear more" style. Featured Track: Baby Drugs Website : Official . ___________________________________ Billy Schafer 's promo states that he soars into the chorus of "The Dream is Alive" filled with infectious passion and conviction. This song and the others from his debut CD, First to Believe, introduce Billy as a singer-songwriter with an intuitive and confident grasp of song-craft. Fueled by accessible melodies and emotive lyrics of romantic depth, wit, and
Post a Comment
Read more
More posts