This is Mumford and Sons on the final gig of the Railroad Revival Tour, at Woldenberg Park; New Orleans, on the 27th April 2011. The band consists of Marcus Mumford (vocals, guitar, drums, mandolin), Ben Lovett (vocals, keyboards, accordion, drums), "Country" Winston Marshall (vocals, banjo, dobro), and Ted Dwane (vocals, string bass, drums, guitar). The band formed in October 2007, rising out of what some in the media labelled the "West London folk scene" with other artists such as Laura Marling, Johnny Flynn and Noah and the Whale. Quoting from the tour website - 'This April, Mumford & Sons, Edward Sharpe & The Magnetic Zeros, and Old Crow Medicine Show will embark on a tour unlike any in recent memory. Traveling exclusively in vintage railcars, the three bands will journey across the American Southwest over the course of a week. The aptly titled Railroad Revival Tour will feature the three bands playing concerts at six unique outdoor locations al
4 comments
Read more 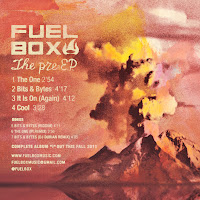 Background: Fuel Box is a Soul/Dub/Blues/Hop-act from the Netherlands that delivers raw, psychedelic but melodic beat songs. Kind of a mixture between Madlib, The Black Keys, Wu Tang Clan, Bill Withers, Lee Perry and Prince. They generate a sound that is best described as if a 60's Soul singer and a latter day hip-hop producer cut an album together in 70's Jamaica. It all started out with singer Remy Britsemmer and producer Josh Boon but today it's a fully operating and functioning live-band. Now they released a Free EP, called "The Pre-EP". It's the preview for the complete album "1" coming out this fall, 2011. "It rarely ever happens that you like a demo this much from the start. But apparently, once in a while there's an act that combines exactly the right amount of passion, technique and musicality that touches you. This duo, consisting of singer Remy Britsemmer and producer Joshua Boon, makes a mixture of hiphop, soul, funk, pop
Post a Comment
Read more
More posts