Showing posts from December 4, 2011
Show All 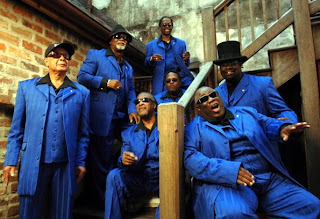 This is the Blind Boys of Alabama recorded live at Congress, Salzburg, Austria back on October 30th, 2009. The source was Austrian Radio OE1 who subsequently broadcast the concert on December 21st, 2009. The Blind Boys of Alabama are a gospel and blues group from Alabama that first formed at the Alabama Institute for the Negro Blind at Talladega, Alabama in 1939. The three main vocalists of the group and their drummer and percussionist are all blind. As of 2011 (and checking their current schedule into 2012) , The Blind Boys of Alabama continue to tour nationally and internationally, with Jimmy Carter singing lead vocals. In 2006, Clarence Fountain, the group's former long-time lead vocalist and founding member limited his touring for health reasons. Founding member George Scott died on March 9th, 2005 at the age of 75. Another founding member, Johnny Fields, died on November 12th, 2009. Releases by the group in recent years have been favorites at the Grammy Awards—th
3 comments
Read more
More posts