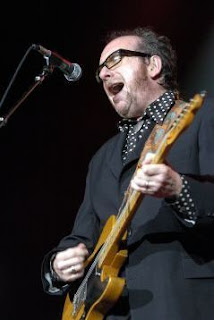 This is Elvis Costello and the Rude Five during their tour rehearsals at the Arlington Theatre, Santa Barbara, California, USA back in May, 1991. The notes that accompanied this recording state, 'this is said to be the last night of a week of tour rehearsals at the Arlington Theatre in Santa Barbara, recorded just before the start of the "Mighty Like A Rose" tour in 1991 (which began May 25th in Santa Barbara)'. If 1990 proved to be a fairly low key year for Elvis Costello, he definately made up for it in 1991 by recording two albums: "Mighty Like A Rose" and "Kojak Variety", although the tapes for the latter were put away for a rainy day (and didn’t see the light of that rainy day until 1995). He then spent much of the rest of the year touring around the world with a combo dubbed "The Rude Five", even though only four of them (Marc Ribot, Jerry Scheff, Larry Knechtel and Pete Thomas) usually played live with Costello (the fifth mem
1 comment
Read more
More posts