Background: Canada has always been a great importer of indie pop. From Sloan to The New Pornographers, you never know what the Great North will produce. Meet your new favorite musical obsession, Andrew Johnston . Taking a page out of the book of great indie bands and stellar Canadian acts, Johnston will have your attention faster than you can say "awesome." Based in Montreal, Andrew Johnston has been playing under his name, or the moniker Andrew vs. the Enabler since 2006.  No stranger to music, Andrew played in the critically acclaimed group The Gentlemen’s Club, and appeared on JF Robitaille's brilliant album, Calendar.  If you haven’t discovered Andrew Johnston yet, let the journey start today. Now is the time for Johnston to branch out on his own. Grounded in the simplicity of easily hummed folk and pop tunes, Andrew’s heartfelt indie rock sound is ready to take the world by storm.  On his most recent release, The Wake of the Wonder Years, influences of such hi
Post a Comment
Read more 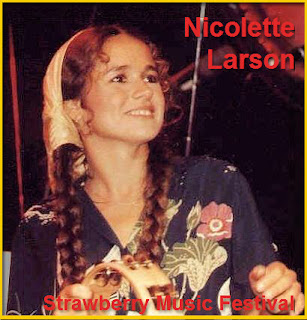 This is a recording of Nicolette Larson performing at the Strawberry Music Festival, Camp Mather, Yosemite, CA, USA back on August 29th, 1986. Nicolette Larson is perhaps best known for her work in the late 1970s with Neil Young, as well as her 1978 cover of Young's "Lotta Love". The song, her debut single, was a Number One Hot Adult Contemporary Tracks hit and number 8 pop hit that year. It was followed by four more Adult Contemporary hits, two of which were also minor pop hits. Nicolette's work with Emmylou Harris on the album Luxury Liner (1977) prominently showcased her on the cut "Hello Stranger" and led to her meeting Harris' associate and friend Linda Ronstadt who became friends with Nicolette . In the spring of 1977 Nicolette was at Ronstadt's Malibu home when neighbor Neil Young phoned to ask Ronstadt if she could recommend a female vocal accompanist, and Ronstadt suggested Larson, becoming the fifth person that day to put Larson's
2 comments
Read more
More posts