August & September Releases - A Taste Of Something Special 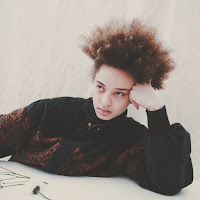 Some background words provided - Connie danced from a young age, having left school at 16, she moved to Hoxton where she began working professionally as a dancer, further opening her mind and soul to music through movement.

In 2015 a friend introduced Connie to UK musician Blue Daisy, their friendship was instant and Blue swiftly became her producer and mentor. Together they set about carving a uniquely tripped-out sound. Wild dreams punctuated by stark reality.

Speaking of her collaboration with Kwesi Darko AKA Blue Daisy Connie says; “Imagine your uncle is god and he only let's the people who enter his heaven know who he really is. (His heaven being a dark and cave like studio filled with stories of the utmost enjoyment of solitude). That's what working with Blue is like.”

At just 20 years of age, Connie’s aura surpasses the time she’s been on this planet. She wanted to create music for her generation that breathes escapism from the cuts and bruises of young British life, penning lyrics on buses and trains. Her poetic words capture snapshots of modern living awash with shades of Erykah Badu. Growing up Connie listened to a lot of London born and bred artists like The Jam, The Libertines and Amy Winehouse, and you can hear echoes of their sound in her rich writing world.

The featured song 'Stars' is an incredible debut for Connie Constance. The vocals, music and production seemingly scream style and class. A touching song delivered with heart and natural soul, I just want to hear more.

Background info provided - New York four-piece ensemble The Frightnrs have announced their latest EP, Inna Lovers Quarrel, coming via Diplo's Mad Decent on August 28th. The band takes inspiration from vintage Jamaican rocksteady combined with 80s rub-a-dub, plus a touch of ska and punk influence for a unique sound that redefines what reggae sounds like in 2015.

They had recent success with their soaring cover of Etta James' "I'd Rather Go Blind" on New York's renowned Daptone Records, as well as airplay from reggae radio legend David "Ram Jam" Roddigan. The Frightnrs have made a real deal reggae record, polished by veteran NYC producer Victor "Ticklah" Axelrod. In Diplo's own words, "close your eyes and get transported to Kingston, Jamaica, 1981."

Any band that takes inspiration from Jamaican 'Rocksteady' tends to achieve two things with me, both get noticed and remind me just how old I am getting. With a song of this class I guess it's worth it, in fact no doubt about that, if you are going to do rocksteady, reggae, or ska, then check this band out as a benchmark on how to do the said genres.