Prepare To Dance Or Leap: Paint The Muse - Home Lives

And we quote - The Los Angeles-based Alt-Dance duo, Paint The Muse, formed in 2015 and is comprised of vocalists, Elizabeth Russo - originally from the Bay Area, and Seattl-ite, Ash Wintergrass. Their dynamic first single, "Free People", on Harbour Records, encapsulates the feel-good vibes of the Summer with a cool indie-pop flavor. Its positive message and youthful energy cue this up as a dance anthem for the summer.

A nice upbeat song that demands movement from your body, however unwilling a dancer you may be. Oh to be young again... 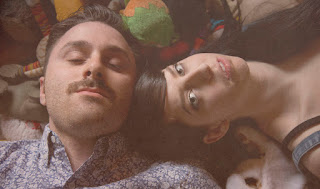 Background provided - Home Lives is the lo-fi venture of New Yorkers Mike Horgan and Brittany Cohen. Working with a number of talented heads in the NY music scene, the pair have a distinctive naïveté which is what makes them so captivating as a musical project.

Founding member Mike Horgan began Home Lives out of his desire to create hooky tunes about brazenly personal topics like childhood, love, post-college Millennial life and the human condition. They’re also very good at throwing the occasional pop culture reference in here and there as well.

Brittany Cohen is the one that makes it a duo where she adds vocals and keyboards to the mix almost effortlessly. Since their conception they’ve experimented with a range of styles which they inject into their indie rock like 50’s doo-wop, 60’s pop rock and garage rock, 80’s post-punk and synthpop, and some 90’s shoegaze and jangle pop.