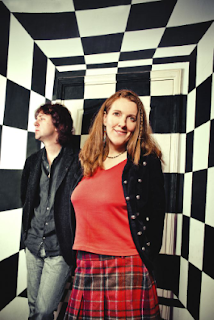 Ummagma - Lama (From the EP 'Frequency').

Background - Canadian-Ukrainian duo Ummagma have confirmed details for the UK release of their EP ‘Frequency’. This mini-album will be available through Raphalite Records and is slated for release on November 13th. Alongside five original tracks, the EP features remixes from Cocteau Twins legend Robin Guthrie, Wales' celebrated Lights That Change, and Malcolm Holmes of Orchestral Maneouvres in the Dark (OMD).

Ummagma consists of Shauna McLarnon, who hails from Canada's Yukon, and Alexander Kretov, who is from Ukraine. Since bursting onto the music scene in 2012, they have made a significant impact on the underground music scene. Their potent combination of uplifting and melancholic textured dreampop, shoegaze, postpunk, ambient and electronica rapidly gained them a sizeable international following despite the numerous issues they faced living between Canada and Ukraine.

‘Frequency’ follows the band's two debut LPs 'Antigravity' and 'Ummagma', which were simultaneously released in 2012. This release represents a slight departure from the first two albums, which whisked the listener through the romanticism of first meetings, big love, adventures abroad and optimistic dreaming through to the realities of birth, loss, death and departure. In contrast, 'Frequency' explores such themes as space and distance, timelessness, escapism, and the search for tranquility.

Canadian-Ukrainian duo Ummagma have blazed quite a trail for themselves in their short history. They've landed press coverage and radio play in more than 50 countries, including Rolling Stone Russia, and have managed to strike an endearing chord with a good number of 'first wave' shoegaze and dreampop artists, particularly from Creation Records and early 4AD rosters. "Ummagma have something very special about them that you don't find in many bands, that is an honest, believable & beautiful lyric delivered by an honest, believable & beautiful voice," says Malcolm Holmes of OMD. "When you combine this with the swirling ambience of lush layered guitars, this duo end up with their own unique sonic landscape."

Dreamy, ambient, gentle and smooth, oh! and throw in lush for good measure. Just what the music doctor ordered. This EP is everything the above promo promised and more.