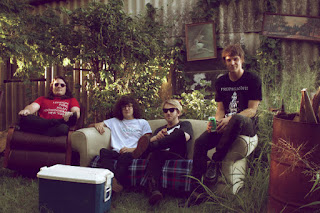 Background - Brisbane goth cricket enthusiasts Hound return with an infectious garage-door banger ‘Driveway’ following on from their album single ‘God is Calling’ - which turned up on a fair few radios and televisions across the great southern land.

Born out of a combined love for 80’s post punk and 90’s alt rock, ‘Driveway’ is equal parts fresh and throwback. Singer Chris Cox’s lyrics and vocal delivery evoke strong images of booze soaked balconies basking in the afternoon sun. Hungover thoughts of being caught in the same environment without a means of escape, sending ones ambitions into the indifferent vacuum of outer space echoing the lyric “I guess we’re back to the same old driveway”. Driveway’ is the first single taken from Hound’s forthcoming  EP to be released early 2016.

Whether it's post punk or goth rock is academic, 'Driveway' is a refreshing blast of high energy, fast paced, good old rock'n'roll music. Best served with plenty of iced beer. 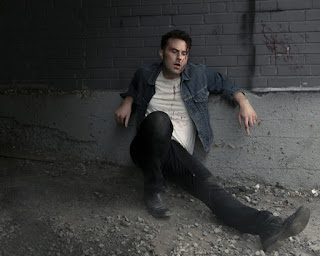 Background words from Andrew Johnston - On the eve of my new tour I'd like to release my new single “Take the Highway”. It's the fruit of my earlier tour dates this year where I reconnected with the magic of art and travel.

I wanted to make something fun and spontaneous that would capture the creative energy I felt coming off a tour of Ontario last May.  Being on the road can feel magical because you connect with real people face-to-face in a really special way and if you are tuned-in just right there is some cosmic energy out there - for example, when we drove into Orillia, Ontario, Gord Lightfoot came on the radio (Orillia is Lightfoot’s home town), and taking exit 64 to Hamilton, the Beatles “When I’m 64” came on...explain that! Ah, regardless of if you believe in magic, “Take the Highway” explores that often living a fulfilling life requires taking chances, and getting outside of your comfort zone.

Meeting the road for me was that chance. For you it may be something different. Regardless, I wrote "Take The Highway" to encourage you to take those chances, go see those places, write a song or simply do what you need to do to expand your horizons. Take the Highway will by a digital only release for now, packaged with a bonus track: a cover of Cory Heart’s 1985 classic “Never Surrender.”

'Take The Highway' has that warm timeless rock vibe of a 'road' song. Story telling, unfolding lyrics and vocals that really can deliver this style, along with some tighter than tight music.