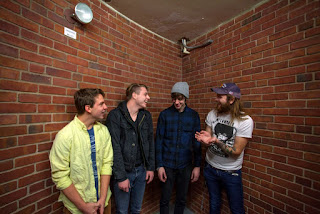 Background promo - Ahead of the band’s first ever UK dates, headlining and in support of Modern Baseball, Sorority Noise announce a new EP for Topshelf Records, “It Kindly Stopped For Me”, the follow-up to their critically acclaimed 2015 album “Joy, Departed”. The EP was recorded and produced by the band with exclusive artwork from Mitch Wojcik.

The intimate first song from the EP, “Either Way”, is available to stream now. Frontman Cam Boucher said the following of the track: “I wrote this song in our van outside of chain reaction in Anaheim, ca. I had found out I lost another friend a few days previous and was having a difficult time thinking about how I had made positive strides in dealing with my mental health but hadn't been able to help friends around me that I didn't know we're suffering from the same thing.”

'Either Way' is a soft acoustic number with calm vocals and harmonies. Keyboards add to the lilting melody, in what is a very delicate song. 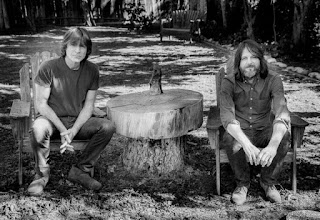 Background promo - Those Pretty Wrongs are Jody Stephens and Luther Russell, two old friends and veterans of the music scene in different ways.

Jody-as many people in rock and roll (and beyond) know-was the drummer for the legendary band Big Star. He went on to help run the equally legendary studio Ardent in Memphis and play with the endearing troop Golden Smog. Luther Russell was the leader of seminal roots-rock band The Freewheelers and went on to make several acclaimed solo records, as well as produce many important artists over the years. Together they have forged a sound that is brand new for both, yet begets a strangely familiar feeling...

It was the documentary Big Star: Nothing Can Hurt Me that brought Jody and Luther together creatively, when Jody asked Luther to join him for some promotional performances. A chemistry was immediately noticed. They began writing songs and performing them whenever possible, soon taking their name from the opening line of Shakespeare Sonnet 41, which they slipped into one of their first collaborations, "Fool Of Myself". A relationship was soon struck up with underground SoCal label (and two-man revolution) Burger Records when the first track they cut in Memphis, "Lucky Guy", was sent to Sean and Lee, who jumped at the chance to release it as a 7", along with the aforementioned "Fool Of Myself" for the flip side. There was an outpouring of support for the new music, which gave Jody and Luther the confidence to move forward. Regarding how this all came together, Jody declares: "In a word...serendipity. So many of the events that brought Luther and me together were just by chance and born out of the Big Star world. I actually thought we might write three or four songs together for an EP but we just kept writing beyond that. 'Another window opened up and through it' we became Those Pretty Wrongs."

Luther lives in Los Angeles and Jody in Memphis, so the commitment had to be strong to persevere in composing these songs and cutting them until they were completely satisfied.

'Ordinary' has so much going for it. Vocals and harmonies rise above the predominately acoustic soundtrack, as the song gently builds. Melodic and calm and very pleasing.