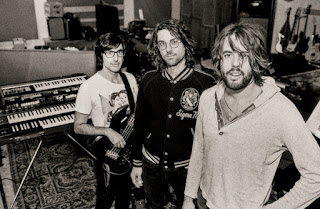 Background promo - After a wild tour through the west coast of the United States and Canada in November, Elephant Stone are strapping down their sitar and vintage guitar gear, and heading out on at US tour (plus honorary American city, Toronto) which has the band in and out of Austin for SXSW. To coincide with the tour announce, the band are presenting another smash song, "Where I'm Going" which features a newer sound that the band has been absolutely killing it with recently.

Rishi Dhir and company have been busier than ever, working on a new LP for 2016, and recently releasing single, "The Devil's Shelter” and are now following it up this week with "Where I'm Going", another stand alone number that hints at where the new record's sound is headed. Having already spent many years satiating the vintage fetishist psych sound, naturally the band has progressed into influences from 1980s and 90s England (think Primal Scream, and other Creation Records artists), and "Where I'm Going" is an exciting nod to that era, but not missing any of the standard Elephant Stone sound that has consistently buoyed a full head above most Can Con-centric outfits out of the north.

With a funky synth laden beat 'Where I'm Going' kicks off and then edges into softer vocals and a psych flavour. The melody builds and we are left with a really cool song.

Jay Scott and The Find - The Other Side.

Songwriter and guitarist Jay Scott releases his first single 'The Other Side' taken from his upcoming album due in late 2016. The single was created following an intense song writing week called 'The Break Through Sessions' at Tile Yard Studios recommended to Jay by his publisher Fairwood. Here he worked with many talented artists and writers including the incredible producers The Knutbrowns, with whom the The Other Side was born.

Touring across the UK and Europe with his band The Find has earned Jay a loyal fan base with shows at legendary venues including Ronnie Scott's, to headlining slots at London's Shoreditch House and Hospital Club; as well as touring with and supporting the likes of Take That and Razorlight.

'The Other Side' is a smooth ultra tight indie rock song, that has enough passion to give it some vital edge. An expression I probably use to often is 'timeless' however in this case I think it fits, spot on.