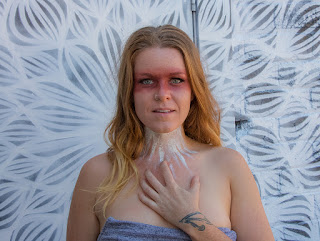 Background promo - Wolfie is the artist name for Lisa McNaughton, a Blue Mountains multi-instrumentalist and singer songwriter. Her music can only be described as an eclectic smash up of roots, grunge, folk and African rhythms which has crossed over from her love of African dancing. Wolfie is all about rhythm, big drums and driving guitar, something you can move to as Lisa says.

Wolfie started out as a solo artist Lisalive. As Lisalive, Lisa won the blue Mountains singer songwriting competition in 2008, which then led to her releasing her debut EP Roots. She played The Falls Festival in 2009, hit no. 3 on the Triple J Unearthed Roots charts and toured New Zealand and the east coast of NSW and Victoria.

Wolfie is her new project and you can listen to one of her dirtier songs “Talking to Myself” on triple j unearthed. Having played shows with the likes of the Jeff Mar/n, Sarah McLeod, Chase the Sun, Lachey Doley and Abbe Dobson amongst other renowned artists, Wolfie has enjoyed sharing the stage with some amazing muso’s already in her young career.

“‘New Horizons’ is a story of my struggle with mild depression, loss of identity and trying to figure out how to exist on this planet basically! A lot of people particularly young people struggle with this once or more during a lifetime and it’s so hard to get yourself out of it. The black dog can come to visit anyone at any time and the more awareness and clearing of the haze and taboo surrounding conversation about it the better,” says Lisa of her new single.

While Wolfie does write the guitar and lyrics she has help from her partner and drummer Sam McClain and their ever changing bassist who at the moment is Steve Stockton. For “New Horizons” she has also recruited the talents of west African style drummers Dom Hanly and John May of ‘Hands Heart and Feet’,  “New Horizons” was recorded in the Blue Mountains in our bass player’s studio, just a couple great mics, tie dyed curtains and a great vibe, magic!  “New Horizons” by WOLFIE will be released 25th of March 2016.

With deep bass drums and a thumping beat 'New Horizons' is a funky piece. Lisa brings even more to the party with her powerful and melodic vocals. 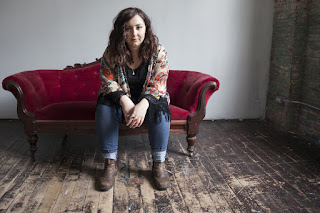 Background words from Gillian - My first single, “Oh Marie” draws directly on the idea that we often find it hard to call anyone or any place home. I've presented the story of a character who seemingly has everything she needs in life, but still has a sense of emptiness. Marie abandons it all for a new life – something that so many have dreamed of, but few have the courage to pull off. 'Oh Marie’ is just as much about questioning how she could go through with her actions as it is about envying them. While at times it may be "pretty", 'No Place to Call' is anything but that: it is charged with emotion, grit and vulnerability.

In late 2015, I headed into Catherine North Studios to work with producer Dan Hosh (Whitehorse, City & Colour, Rose Cousins) on my sophomore EP, 'No Place to Call'. Mastered by Elliott Brood’s Stephen Pitkin, the five-song EP is a move to a sound that I feel more fully defines me as an artist. The full EP will be released this Spring!

'Oh Marie' is a modern folk song with rich vocals and excellent musicianship. As the song builds the hooks got under my skin, what a charming song. 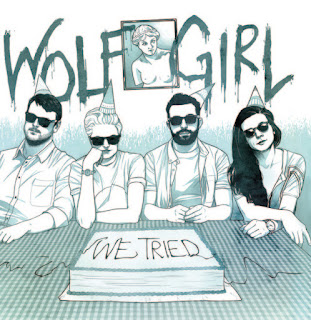 Background promo - Wolf Girl are Becky, Chris, Carl and Christabel - a garage pop four-piece based in South London with a shared propensity for long walks on the beach, guitars that look like Cadillac's and feral teenagers. Having met each other through being in awkward teenage bands in the South East, they eventually formed in September 2013.

Their debut EP ‘Mama’s Boy’ was released on limited edition cassette on Soft Power Records (who have also been the first home to the likes of Witching Waves, The Spook School and September Girls) in November 2014, and stays true to the poppy energy of their frenetic live shows. With admirable authenticity, they record and rehearse in an old garage called Bucket East that backs onto the river Wandle, staying faithful to their garage-rock tendencies. It’s been said that they both do and don’t sound like the Ramones, and have also been compared to both the Shop Assistants and Bratmobile.

Wolf Girl have their own trademarks though, offering a spirited take on powerful, melodic and jagged indie pop that often recalls the noisier aspects of C86.

'Deep Sea Diver' is the sixth of nine songs on the new album. Released on 25th March 2016 'We Tried' is a collection of garage and punk pop, with the emphasis on highly upbeat and enjoyable pop tunes. It's unpretentious high energy music, which mixes male and female lead vocals, and it is brilliant!