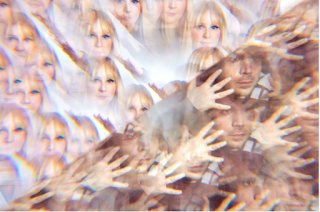 Background promo - New York neo-psyche band Corbu are streaming ‘Polygon Forest’, the first track from their forthcoming debut album. With its choral harmonies and tribal drumming over shimmering, glacial synths ‘Polygon Forest’ is a glorious and uplifting trip, taken from their album Crayon Soul, out 5th August 2016 via 3 Beat (EU) & Big Picnic (US).

Recorded and produced by the band, Crayon Soul was mixed by Dave Fridmann (The Flaming Lips, Tame Impala, MGMT). A vivid exploration inspired in part by vocalist and multi-instrumentalist Jonathan Graves’ lucid dreams, Crayon Soul is a truly realised vision. “It’s a journey through a series of “gates”, or events that you pass through with the narrator,” says Graves of the album. “At each event, you change and shift into a new part of the story.”

Extremely visual, Corbu create captivating, kaleidoscopic visuals to accompany their music. Encouraging listeners to paint their own path through Corbu’s world, Crayon Soul includes a colouring book, as well as artwork inspired by each of the twelve songs.

Crayon Soul follows two acclaimed EPs, We Are Sound and Everything You Imagine Is Real, which garnered praise from the likes of NYLON, Stereogum, The Guardian, NME and more, as well as capturing the attention of Jessie Ware, who personally requested the band to remix her song ‘You & I (Forever)’.

The album is a feast of ideas and thoughts captured musically with considerable imagination. 'Polygon Forest' is just one dimension of an epic album, that explores differing musical styles. First time around the listener can't be to certain just how the next song will develop, giving a sense of journey and discovery. That said, there is a constant overall feel to the album, in part due to Jonathan Graves vocal skills. It's a refreshing listen, no wonder that the attention is already there. 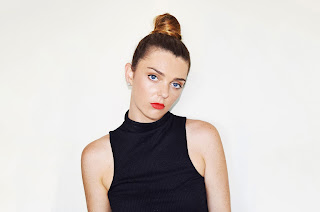 Background - About "Get Hi" “'Get Hi' is about my housemate’s battle with cocaine addiction,” Allie explains. “He absolutely loved to party and lived only for the weekend but his substance abuse had seen him get into thousands of dollars in debt, which put a massive strain on his relationship. He was constantly beating himself up about it, saying he was going to give up the party lifestyle and pay back the money he owed, but as soon as the weekend rolled around he’d get so excited and be up to his old tricks again. He just couldn’t resist the temptation.” - Allie

Bio: Allie & Ivy is indie electropop singer-songwriter Aleisha (Allie) Conlay, from the sunny northern beaches of Sydney, Australia. Writing songs since the age of 11 and picking up the guitar at 14, Allie was schooled in music at a very young age by her father, a guitarist and record collector from London with a passion for 60s music.

Having developed a deep infatuation with The Beatles at age 11, Allie had dreams to one day front an all-girl rock band called The Ladybeetles but unfortunately never managed to find her Paul, George or Ringo. Not one to let that get in the way of her plans, Allie conjured up alter ego Ivy, giving her the comradeship, confidence and support a real band couldn’t.

Allie & Ivy’s fresh sound and penchant for catchy hooks and infectious melodies have gained accolades both in Australia and internationally. With new songs scheduled for release throughout 2016 and a debut EP underway the year is already shaping up to be a busy and exciting one for Allie & Ivy.

Well there is always some room for unashamed pure pop when it's this good. As with any good indie pop piece, it's awash with hooks and upbeat all the way, sometimes that's more than enough. 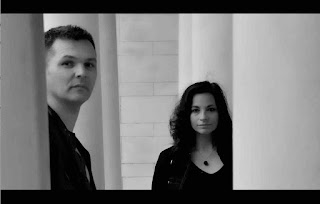 Background promo - France's electro rock synthpop outfit Helix Pulsar has announced they will soon release their debut LP 'Beyond the Wall', a 12-track debut EP that was produced by Britain’s Creative Music Studios, which is based in Brentwood. ‘Rapture’ is the lead single from this album.

Most often likened to The Danse Society and Clan of Xymox, they count Depeche Mode, The Cure, Archive, Mesh, IAMX and Muse among their key influences. They also seem to draw inspiration from such themes as sexuality and the addictiveness therein. “This song is about how it feels to surrender to the burning desire of one’s lover… a perfect blend of sensuality and wild instincts as well,” says Estelle Flaujat.

In early 2014, Olivier Rennesson (formerly of Shiny Darkness) joined forces with Estelle Flaujat, who had, until then been involved in gospel and jazz. They united over a shared love of synthpop and electropop and founded Helix Pulsar. Both educated in classical music (piano for Olivier, piano / violin for Estelle), they compose their music as absolute electro synthphonies - note by note, pulse by pulse. After relocating from Nantes to Lille (northern France), they chose to add a rock dimension to their synth pop vibes and welcomed guitarist Steve Boudoux, and their sound came to adopt the sense of pulsating electro rock waves, with contrasting yet engaging rhythms and distinctive harmonies.

"We’ve been crafting this album over these past 2 years composing with our busy private lives. This album is grounded in our personal history, helping us to expel our inner wounds from the past but also celebrating our love and life together," explains Olivier Rennesson. 'Beyond The Wall' will be released on May 6.

The semi-industrial and hypnotic beat makes a perfect background for the duo's vocals. There are a few name checks in the promo and they make sense, however there is a unique and quite addictive feel to this song, that leaves me keen to hear more.