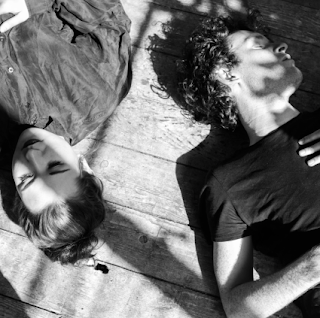 Background words - Feral Love formed when Adele Emmas and Christian Sandford emerged from the ashes of Bird, a band who were on the cusp of success having played BBC Radio 6 Music's festival alongside Damon Albarn and Haim, were championed extensively by the UK music press and had their music featured on TV's Sky Sports, The Killing and The Messengers.

When Bird suddenly disappeared, Emmas and Sanford spent a year in a damp, windowless basement studio writing, emerging only when they knew they'd arrived at the sound they'd been striving for.

'Like The Wind' is melodic, full of hooks and so well put together. Loosely labelled as electronic, it's more of an anthem and a reminder of just how good pop music still can be. 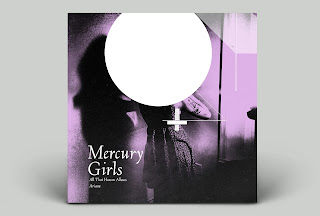 Background promo - Philadelphia, PA’s Mercury Girls features Sarah Schimineck, Kevin Attics, Andrew Hagiwara, Chris Schackerman, and Kevin O'Halloran. Schimineck, formerly of NYC Popfest alums Pet Milk is flanked by the shimmery and adventurous guitar interplay of Attics (Literature, former Pitchfork Media) and O'Halloran (of indie heroes Little Big League, Run For Cover Records). Hagiwara and Schackerman provide a sturdy rhythmic base, creating a sound that's equally lush and driving, using Sarah Records-inspired pop as a basis for  savvy de-/reconstruction and sonic experimentation. Despite having only started in March of 2015, the group has achieved a lot. They've collected many endorsements, including those from Chickfactor Magazine, Pains of Being Pure at Heart's Kip Berman and NPR,  they've shared the stage with bands such as Expert Alterati ons, Joanna Gruesome, Beverly, TEEN, Eternal Summers, and their 2016 SxSW visit was a head-turning, mind-melting blast.

Now they cap of their first year with the release of their debut single, Ariana.  While their sound uses classic indiepop as a jumping-off point, there are bits of shoegaze, post-punk and DIY punk in the mix that recall like-minded bands like Veronica Falls, Makthaverskan, Fear of Men and Frankie Rose. "Ariana" is gorgeous tangle of chorused, jangling guitars and Sarah's dreamlike vocals. A marvelous two and a half minutes of perfect, forward-thinking pop. On the flip, "All That Heaven Allows" leans more on the band's post-punk inspirations, marked by a careening rhythm and a huge chorus that will stick in your head for days.

Ariana is out May 20th, just in time for the band's engagement at NYC Popfest alongside legends The Primitives and The Chesterfields. The spring is looking to be fully scheduled with shows up and down the east coast, keeping the band busy while they write and record their highly-anticipated debut album. (Pre order Here).

There's a little bit of genre hopping on this pleasing debut single 'Ariana'. At it's core I guess is indie pop, however as it rightly indicates above the band are not glued to just that. With a song that comes in at two and a half minutes Mercury Girls have made sure every second counts.

These self-proclaimed "Post-Neo-Anti-Close Lobsters" are back in a big way, and with these two tracks you'll be quickly convinced of that. The A-side, "Under London Skies," serves as both a lament and ode for London- the radical London of The Clash, the Rock London of The Only Ones and Flesh for Lulu, and the Libertarian London of The Mob and the June Brides. There's a lot of history (both musical and otherwise) tied closely with London, and if any band is gonna do justice to that fact it's undoubtedly our trusted Close Lobsters. If that sounds like a big subject to tackle, the single's B-side "Wander Epic Part II" will make you think again. Calling the song an epic is no exaggeration; the band has described it as a yearning for the vast and endless sea. The song is both a wanderlust and a pilgrimage, designed to take the listener on a journey as huge as the subject matter they're tackling.

This is one really superb song and it's not alone, the EP is exceptional. Close Lobsters create a passionate, natural and earnest sound and then deliver songs so catchy, that hitting the replay button becomes compulsive.