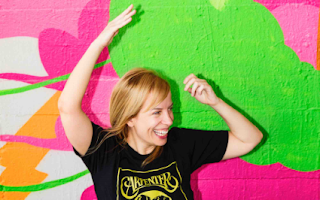 Originally from Paris, Morgane moved to London when she was 20 and spent 12 years there. Then she moved to NYC and, nine years later, moved to Los Angeles. Her name is known to many for her work as keyboard player in the seminal indie kosmische act Stereolab, having recorded and performed with the band during their imperial phase between 1995 and 2001, when they released a series of career defining albums including ‘Emperor Tomato Ketchup’ and ‘Dots and Loops’. Fans of Common will also be able to find Morgane on the Sgt Pepper inspired sleeve for his Electric Circus album. She followed her time in Stereolab with a stint in The Projects and, from 2005, played in Garden with members of Simian Mobile Disco before starting the Hologram Teen project.

The Hologram Teen sound, although embracing electronica and pop, does so in a way that is more evocative of a prog rock disco horror soundtrack than the soulless EDM that fills the pop charts. "It's like Fabio Frizzi meets Grandmaster Flash," says Morgane Lhote. Her debut sold-out single 'Post-Apocalypteacakes' was released on London's Deep Distance label and mixed creepy vintage library effects with bouncy dancehall synths and disco beats. Following its release, Pulp's Jarvis Cocker came to be among her many newfound fans.

"With Marsangst, I wanted to write a minimal techno track that still retained groovy, more dance-like elements, with a splash of Krautrock and a futuristic vibe," explains Morgane. "Kyaputen Fyucha is also on the cover, rescuing stranded space explorers one at a time with his magic pink disco vinyl, while Disco Démon gets serenaded by four-eyed cats. Never a dull day in the Hologram Teen galaxy!"

Written by Morgane Lhote and co-produced with Jonathan R. Freihofer, both tracks were mixed by Jonathan R. Freihofer and mastered by Adam Gonsalves at Telegraph Mastering.The single’s glorious sci-fi artwork is by Alex Smith. This single is limited to 300 copies and distributed worldwide by Cargo Records. It is also available direct from the label at www.happyrobots.co.uk

'Marsangst' is a wonderful piece. Have to agree with Morgane's above description of this track, and for me the "splash of Krautrock" is the icing on the cake. Totally addictive music. 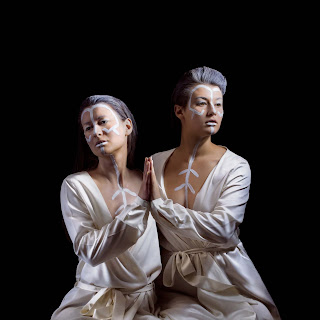 I Am Karate - Bitter (plus Gabriel Gassi Remix).

Background words - DIY duo I Am Karate consists of Erika Soldh and Marta Pettersson, who are known for their contemporary sound of indie electro-pop. Some of their recent success includes a nomination for Best Unsigned in GAFFA along with reaching over 700,000 streams on Spotify. Some of their incredible live performances have led to comparisons to artists including Kloe. The single Bitter has had a very good reaction in their native Sweden, and have already been compared to the likes of The Knife and Young Galaxy.

The two remixers for the track include Gabriel Gassi and Illien, who remixed Mavrick’s single. Both pieces are outstanding examples of the spectrum of sound throughout I Am Karate’s music and prove that the pair can conquer different genres successfully. During both remixes, the melody feels familiar with powerful electronic beats, layering of vocals and a tropical house style; therefore the production has similarities to Jungle and even Major Lazer. Vocally, we can instantly draw comparisons to Purity Ring with a hint of FKA Twigs from the soprano tones.

Partly to demonstrate just how different and creative the remixes are, I have chosen one remix to compare with original release of 'Bitter' (well that's my excuse for featuring both - nothing to do with just loving them both...). So feast your ears (twice). 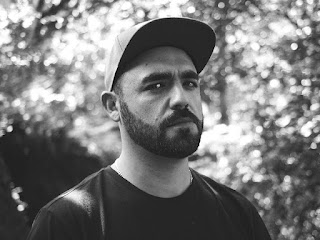 2015 saw Waza's ‘The Art and Techniques Sessions’ come to light, an experimental story told through music in three parts. Such an aspirational project naturally attracted an impressive musical rap sheet, drawing love from all across the nation’s airwaves, with adds and appearances on triple j’s Breakfast Show and The Hip Hop Show, FBi, 2SER, 3RRR and Unearthed.

Shedding his hip-hop roots, “Rocks and Bones” sees Waza getting back to something a little more straight up sonic. Emphasising synth and melody the song is a treasure trove of lush production, polyrhythmic melodies and a massive beat that feels like it’s swinging from a pendulum. The cherry on top comes in the lavish vocals of a dreamy new talent: Aquila Young. “Rocks and Bones” is just a taste of Waza’s upcoming LP Crooked Jaw slated for release in 2016.

'Rocks And Bones' is a creative song with Aquila Young's vocals well up in the mix, where they belong. At times the soundtrack is quite laid back, and seemingly sparse as it teases with the vocals, yet somehow this just seems so right.

Background (brief & to the point) - Kolidescopes is the duo of Dan Dare and Yeah Boy. Dare is a hit producer for the likes of Charlie XCX, Wiley, Juelz Santana and Marina And The Diamonds whilst Yeah Boy hails from Australia and has already seen wild success with Parachute Youth, having reached platinum record sales.

According to Kolidescopes and to quote them "We got all your summer music needs". Well featured song 'Memory Lane' just oozes summer vibes. Hooky, melodic and sun drenched, it's one fine mood shifter, and some...