And The Beat Goes On: The Wedding Present - Losers - Port Juvee - Conversing With Oceans 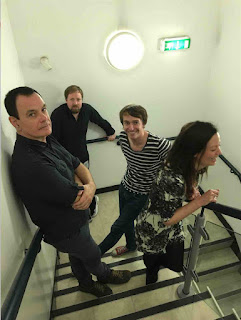 Background - The Wedding Present present their track 'Broken Bow' not long after premiering 'Kill Devil Hills'. These are among the more animated bustling tracks from their new album ‘Going, Going…’, referencing the interplay between alienation, distance and freedom for the first track and a sensual predatory encounter in the second. This UK indie cult band's widely anticipated ninth studio album gets its vinyl release on December 2nd in North America via Happy Happy Birthday To Me Records (HHBTM). The album retells the story of a road trip across the USA, revealed across a collection of twenty ‘linked’ songs, each with an accompanying short film.

'Going, Going…' is also the first double album in The Wedding Present’s long glorious career. It opens with four haunting instrumentals, as if David Gedge has been stunned into silence and is slowly working up the courage to speak, like when your loved one asks you what’s wrong and all you can manage to do is slowly shake your head. Finally, he collects himself and explodes into ‘Two Bridges’, and even then he’s only able to leave a voicemail message—he probably made sure to call when he knew she couldn’t answer.

Formed in 1985, The Wedding Present are one of the UK’s most longstanding and much-loved indie bands with eighteen UK Top 40 hit singles to their name. The Fall’s Mark E. Smith, in his northern-ness, his cantankerousness, is one of the few peers who can match David Gedge’s longevity.

I cannot miss the chance to feature another song from The Wedding Presents latest album, this time we can share 'Broken Bow'. Currently on tour in the UK and Ireland the band have some US tour dates scheduled for 2017 (see above). As for the song, well it's typical of the high quality across the album, an album that will easily sit up towards the top end of my favourites for 2016. 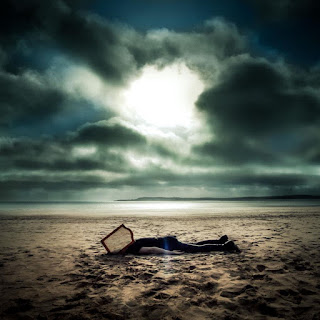 Background - Losers have shared their new video for the track 'The Ruiner', this video comes alongside the news that the band will soon play a headline show at London's Electric Ballroom on 30th November 2016. Losers released their brand new album 'How To Ruin Other People's Futures' in September 2016.

Made up of Tom Bellamy (ex-Cooper Temple Clause), Paul Mullen (ex-YourCodeNameIs:Milo/Young Legionnaire), Eddy TM (DJ/new music radio and club guru) and Dean Pearson and with years of history across a huge range musical landscapes, Losers are the rarest of species, a band with no safety net and no conformist formula to follow.

Their previous material has crossed over a huge range of styles and genres with their earlier dance driven material developing all the way into the more rock driven and poignant emotive output of their previous album. Now, Losers are back with another more developed new outlook, as a new band, and more importantly, with their new album ‘How To Ruin Other People’s Futures’. Website here, Facebook here.

The video for 'The Ruiner' has something a little "film noir" about it. The song has a darker and moody feeling coursing through it, and collectively I am left needing to watch and listen again. It's a credit to their recent album release. 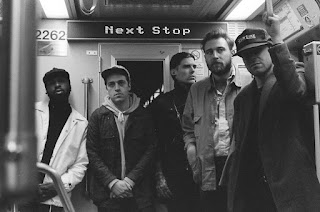 Background - Port Juvee is excited to release their new music video for "Bleached Out Soda Pop". The beachy video paired with Port Juvee's sunny garage rock-inspired sound is the perfect antidote for the winter blues.

Port Juvee may call the plains of Canada home, but they are no stranger to international success. Having played a multitude of festivals including CMJ, Sled Island X-Fest and Rifflandia, the fivesome has also supported DIIV, Titus Andronicus, Twin Peaks, Sticky Fingers, Bleachers and The Orwells on tour. The band also slipped into the global spotlight in 2014 when tracks from their Revenge EP were featured in Herschel Supply Company’s Spring ad campaign.

Although Port Juvee embody a sound that is equally indebted to New York City post-punk and California surf garage, the band's stomping grounds are in Calgary. An isolated city that thrives on extremes, the huge vacant buildings downtown take on an eerie feeling after dark and inhabit a post-apocalyptic vibe. This, combined with the band's obsession with gritty 80’s films in the vein of John Carpenter and David Cronenberg, are the essence and source of inspiration for their energetic post punk sound. Bandcamp here, Facebook here.

The video is a little like a summer tourism promotion, however 'Bleached Out Soda Pop' quickly helps it to double up as a fine music video. Above they are described having a sunny garage rock sound, I can't argue with that, Port Juvee are quite addictive. 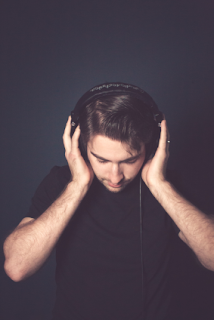 "Past. Present. Future. combines all aspects of time, while my name (Conversing With Oceans) combines locations. It’s a coming together of time and space. Also, the songs progress from a starting place of past conflict (“A Spotlight on 3rd”) to current love (“The Gold Rush” and “Deeper”) to a place of future inclusion of others in that love (“Heart of a Poet”, “The Dream”). Finally, ‘The Dream’ is the only full-band song on this EP and my next EP will be more of a full-band sound,” says Conversing With Oceans.

Conversing With Oceans’ first single “The Gold Rush” quickly landed him a one-on-one showcase with the legendary Randy Jackson at this year’s SXSW and a global distribution deal with The Orchard. Website here, Facebook here.

'The Gold Rush' is such a fine indie pop song, as in fairness are the other four pieces on the new EP.  Conversing With Oceans may say that on the EP, only 'The Dream', is a full band song, in which case his ability to make each track expansive and so lush is quite something!