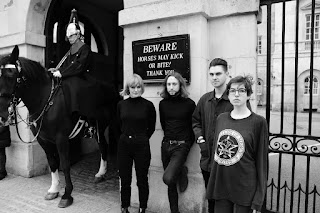 Background - Pursuing their sonic manifesto “to use as few words and chords as possible”, London four-piece Moderate Rebels have followed their debut single ‘God Sent Us’ – a ‘Lamacq Livener’ frequently spun on BBC 6Music and Radio X – with a blistering five-track EP to be released on 2 June on Everyday Life Recordings.

“We want to acknowledge the conditions of the era we find ourselves in and generate feelings of transcending them,” say the band. To this end, ‘Proxy’ was recorded in a small South Bermondsey studio while Moderate Rebels were reacting to stimuli including (but by no means limited to) Spacemen 3, La Dusseldorf, Kaitlyn Aurelia Smith, Roxy Music, Black Box Recorder, Jenny Hval, Death In Vegas and MGMT.

The resulting five tracks, each stamped with the quartet’s muscular hypnotic euphony, lend themselves to expansion and are being showcased at gigs via extended 15-minute versions (two per show). The second of these nights is at The Finsbury, Manor House, London on Saturday 3 June.

Moderate Rebels are among the first wave of acts to be announced for Rockaway Beach at Butlin’s Bognor Regis next January, alongside the likes of Wild Beasts, The Orb and Honeyblood. The band are currently mixing their debut album, due for release in summer 2017.

Pulsing with all the energy of Moderate Rebels’ mesmeric live shows, ‘Liberate’ sets in motion a contagious riff that surges forwards while tributaries of guitar flow over, under and through pounding motorik rhythms and a precise, gloriously aloof, vocal. “What’s intriguing about the word ‘Liberate’ is how flexible it is,” say Moderate Rebels, a band striving to achieve their own version of liberation through this intoxicating new release. The Picta here, Bandcamp here.

The vocals and harmonies on 'Liberate' are seemingly detached from the tight and efficient rhythm that drives the song forward, yet collectively the song is quite heady and oozes an inviting level of cool liberation. 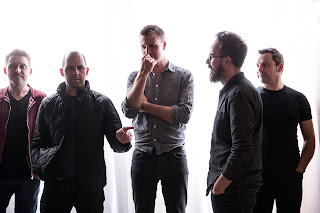 Background - Irish band, Bell X1, undoubtedly one of Ireland’s most beloved bands, is back with their seventh studio album, Arms, out in the UK on July 21st 2017.  Arms is the follow up to their 2013 critically acclaimed album Chop Chop, which became the trio’s third #1 album on the Irish Album Charts and their fourth consecutive album to be nominated for a Choice Music Prize for “Irish Album of the Year.”

Arms is a nine-song collection radiating with shabby grace and soft-focus elegance, but there’s also a bruised, bittersweet, romantic mood throughout. Melancholic and lovelorn in places but also spirited, determined and optimistic which speaks volumes about how the band has grown sonically over their storied career.  “This has been the most difficult record we’ve made, in terms of feeling like it was good enough to share, to let it go and no longer be just ours. That we’d made something different to what’s come before” says Noonan. “I know we’ve been crazed with doubt, occasional bum steers and misguided conviction along the way and we say thank you to those who’ve calmed the waters…”

Produced by the band and recorded in Dublin and Donegal by Tommy McLoughlin (from the Villagers) and Glenn Keating (from Jape), Arms was mixed by Peter Katis (The National, Jónsi) with Ross Dowling mixing the song “Out of Love.”  “The title Arms is about the idea that, as the world feels like it’s becoming a harsher place (maybe there’s just more damn noise?),” says singer Paul Noonan. “We seek out the comfort of the familiar and familial…arms.”

Bell X1 will be on tour throughout Ireland, The UK (in support of Tori Amos) and Australia for the rest of the year, with more dates to be announced.  This year, they’ve headlined sold out shows at Dublin’s Iveagh Gardens and Galway Arts Festival and had top billing at the 2016 Indiependence Festival in Cork. In 2015, Bell X1 played a fully sold out acoustic tour and supported Ed Sheeran for two big shows at Croke Park, one of the largest stadiums in Europe. Website here, Facebook here.

The new album 'Arms' includes 'The Upswing' which as an individual piece was recorded at least a year ago. No wonder the promo describes Bell X1 as one of Ireland's most beloved bands, the new album is just full of great songs, the featured track is just an indicator of this highly recommended new release. 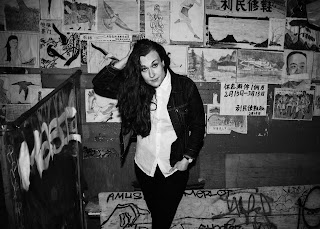 Katie Buchanan - Stand with Me.

Background - NYC-based, guitar-driven singer and songwriter, Katie Buchanan sophomore album, Who We Are When We're Standing, is due out Friday, June 9, 2017. The record is written and produced by Buchanan, mixed by Doug Schadt (Maggie Rogers, Wet, Emmy the Great) and mastered by Heba Kadry (Neon Indian, The Sea and Cake, The Mars Volta, Trust).

The indie pop troubadour “deserves a prime spot on your daily playlist,” praises City Of Tenants, and they aren’t alone in their admiration. No Depression says, “it’s these under the radar artists like Katie Buchanan that renew my belief that in the right hands rock is not dead.” Buchanan’s music is guitar-driven pop with Americana roots and a slight electro spin. Honing her production skills while studying at NYU’s Clive Davis Institute of Recorded Music and combining them with those homegrown roots, her music is “presented on a plate of spicy true blues tradition with just the right garnish of folk, roots, country and yes - a little electronica,” No Depression continues, “The Americana will follow and it will embellish it beautifully.”

The Kansas-native grew up surrounded by music, having been born into a long line of musicians. With childhood memories of learning the blues around a campfire, you could say that songwriting is in Buchanan’s blood and comes almost as a second nature.

2014’s EP Go received praise from Surf Rock Music (“you will never get tired of hearing it”) and Guitar World (“power vocal delivery conjures up an entrancing and magical experience.”) In 2015, Buchanan released her debut album, Glow, which earned her comparisons to Bonnie Raitt and Fiona Apple from The Revue. Elmore Magazine draws comparison to “a lost peak-Tears For Fears track” in regards to the album’s stunning track “Gold.” Glow’s shimmering lead single “Honey, Don’t” was premiered by The Vinyl District, who say they found themselves “in the arms of a wide-open pop song equipped with a stuttering electronic beat and moody chorus.” No Depression says the single “has the power to draw a listener into a vacuum of colorful melody.” Website here, Facebook here.

Our second feature for Katie Buchanan this year is 'Stand with Me.' Plenty of other music reviewers have enthused over her music as can be seen by the words above. Katie does not sit comfortably in any particular genre, she does however create very desirable music, whether indie or Americana, and plenty of other styles.