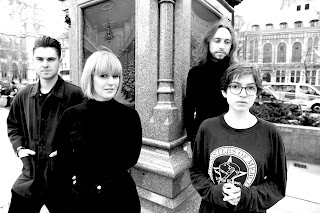 “We tried to create conditions where the songs could write themselves with minimum resistance; an automatic writing situation,” say Moderate Rebels. “The point was to remove ourselves, our beliefs and our intentions as much as possible; to just let it happen. It’s never been about us, we want to make music that aims at being more important than that.”

Having set out their hypnotically brutalist improv with prior releases ‘God Sent Us’ (Nov 2016) and the ‘Proxy’ EP (June 2017), which garnered huge acclaim, not least from the aforementioned broadcasting luminaries, the group decamped to a small Bermondsey studio to cut an album influenced by (but by no means limited to) Spacemen 3, La Dusseldorf, Kaitlyn Aurelia Smith, Roxy Music, Black Box Recorder, Jenny Hval, Death In Vegas and MGMT. These artists were not the only thing that impacted on the final record, however.

“There were churches on either side, so we’d hear the congregations singing and playing all day, celebrating their spiritual beliefs with a jubilant and communal noise. Without getting too much into psychogeography, that couldn’t help but bleed into what we were putting together. It’s powerful and uplifting stuff, no matter what your own particular philosophy may be. At the very least, it explains all the handclaps on the album!”

The resulting 13 tracks, released as ‘The Sound of Security’ on Everyday Life Recordings last Friday, are as fascinating and exhilarating as such contrary stimuli would suggest, being energetic, intoxicating and ruthless in their stark approach, yet imbued with all the freedom of a group utterly at ease. “Our music seems to be all about turning weaknesses into strengths,” say Moderate Rebels, a little modestly. “We decided to not try to gloss over our musical limitations and imperfections, and just embrace them.” TWITTER, BANDCAMP.

Occasionally we get to share an entire album as is the case now with Moderate Rebels and the newly released 'The Sound of Security'. We featured the band back in June with the song Liberate which we described this way "The vocals and harmonies on 'Liberate' are seemingly detached from the tight and efficient rhythm that drives the song forward, yet collectively the song is quite heady and oozes an inviting level of cool liberation." Now we have twelve more songs to become engrossed in, and I have to say, that's the effect this gorgeous juxtaposition of power and minimalism is having on me. 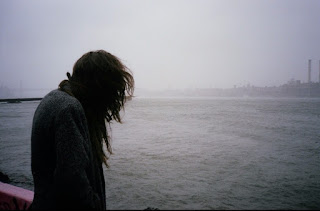 The Echo Friendly - Power Through.

Background - The Echo Friendly shares their new single "Power Through." The track is from their forthcoming album Surveying The Damage, out today. The band explains that "it's a song about loving your partner and your band mates enough to survive the constant anxiety of life under late capitalism."

The Echo Friendly are a rock band from Brooklyn made up of married couple Shannon Esper and Jake Rabinbach as well as their friends Jake Vest and Greg Faison. Placing frank diary-like lyrics over propulsive drums and distorted guitars, they make anxiety and romantic confusion something you can sing along to.

Their songs have been featured on HBO’s Grls and Looking, as well as the films “Sleeping with Other People” and “Goodbye World.” Their debut album “Love Panic”was released in 2014 and their new album will be out before the apocalypse, godwilling. WEBSITE, FACEBOOK.

'Power Through' is a catchy indie rocker with a beautiful mixture of jangly guitars, feisty rhythm and totally hook laden vocals. 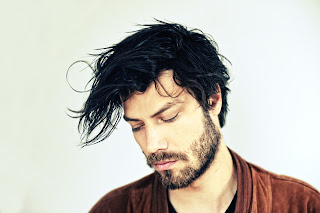 Faces on TV - The Image of Boy Wonder.

Background - Faces On TV have announced their upcoming album with the release of the brilliant first single to be taken from it, 'The Image of Boy Wonder'. To celebrate, Faces On TV have released a mind-bending video for it.

Belgian artist, Jasper Maekelberg, the front man of Faces On TV, is a multi-talent. He has produced top 10 records, toured as part of Warhaus, as well as leading Faces On TV. In the past, the band have supported the likes of dEUS, Yeasayer, and Balthazar.

They have gained many fans since and their previous single ‘Love/Dead’ has now had more than 1.3 million streams on Spotify. Having also performed at a variety of festivals such as Pukkelpop, Xpo North, and Here Comes the Summer they have now been chosen to perform at this year's Eurosonic festival in The Netherlands, too.

'The Image of Boy Wonder' is the first single taken from the debut album by Faces On TV, which is due out in April 2018 via Unday Records. WEBSITE, FACEBOOK.

'The Image of Boy Wonder' is an attention grabbing song title, and thankfully my intrigue is quickly rewarded. With a mysterious opening the piece gradually leads us into a superb chorus line, from which the track builds into something imaginative and splendid.