Curse Of Lono - The Hanging Stars - The Mobros - Cape Weather 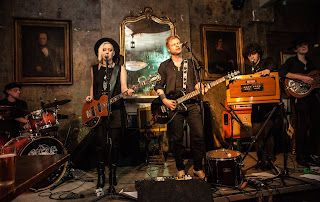 Background - London five-piece Curse Of Lono have announced the release of second album As I Fell on August 17th, and plus new single Valentine. “Valentine is about the kind of murderous jealousy that twists you up until you don’t recognise yourself anymore. The sort of dejection that will make you do things you know you will regret,” says Felix. “I think the vocal harmonies floating over the tribal beat, distorted bass and filthy baritone guitar going through a tiny 1950’s Selmer practice amp, really capture that feeling.”

Second album As I Fell, produced by Oli Bayston (Boxed In) was recorded half at Rancho V, a remote desert studio in Joshua Tree, and half at Flesh & Bone Studios in Hackney; and the album is accompanied by a documentary ‘Somewhere In Their Heads’ by Gregg Houston (Noel Gallagher, Two Door Cinema Club, Michael Kiwanuka, Foy Vance).

Joining Felix in Curse Of Lono, who formed in London in 2015, are Joe Hazell (lead guitar and vocals), Dani Ruiz Hernandez (keys and vocals), Charis Anderson (bass and vocals) and Neil Findlay (drums).

As I Fell is the follow-up to their 2017 debut Severed, and builds on Curse Of Lono’s deeply cinematic blend of harmony-laden Americana and driving, gothic alt-rock. It’s a sound that owes as much to old faithfuls like The Doors and The Velvet Underground as it does to more modern practitioners of the form such as The War On Drugs and Wilco. WEBSITE.

Well we featured Curse Of Lono once in 2016, once in 2017 and now for the first time in 2018, I kind of hope we might get a second crack at sharing some more of their music this year. 'Valentine' demonstrates abundantly that the band have a distinct and highly engaging style and sound, the video adds more, as the band expand on the simmering tension and focus of the song, 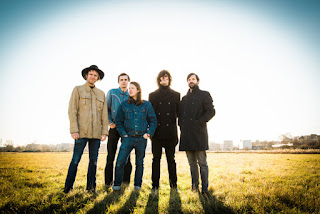 The Hanging Stars - For You (My Blue Eyed Son).

Background - Ahead of their forthcoming tour with kaleidoscopic Californian folk-rock janglers GospelbeacH, The Hanging Stars share their new single "For You (My Blue Eyed Son"). The track is co-written and sung by Richard Olson (The See See/Eighteenth Day Of May) and Patrick Ralla (Alan Tyler Show, Edwin Colilns). It is perhaps the most traditionally country song on their recent critically acclaimed Songs For Somewhere Else album, with two-part lead vocal continuing throughout, supported by finger-picked guitars and classic drum shuffle.

The tour with GospelbeacH starts on 28 May in Brighton and heads through Manchester, Glasgow, Edinburgh and Newport, finishing up at London's Bush Hall on 4 June. The Hanging Stars will also be playing an acoustic set at the Red Rooster Festival.

Channeling the sounds of The Byrds, Big Star and The Flying Burrito Brothers, as well as hints of Mojave 3 and The Allah Las, The Hanging Stars mainline the dying embers of the early 70s psychedelic folk and cosmic country scenes.

Recording was conducted at the legendary Bark Studios in Walthamstow with Brian O'Shaughnessey (The Clientele, Primal Scream, My Bloody Valentine) at the helm. Joining Richard Olson and Patrick Ralla in The Hanging Stars are Sam Ferman on bass, Paulie Cobra on drums and pedal steel courtesy of Joe Harvey-Whyte. They had a collective attitude to performances on the album, with additional input from US friends Collin Hegna (Federale, Brian Jonestown Massacre), Miranda Lee Richards (on the emotive duet “How I Got This Way”), and Christof Certik (Brian Jonestown Massacre, Winter Flowers), as well as Alison Cotton on viola (Left Outsides, Eighteenth Day Of May), Luke Barlow (Nought) on flute and Thomas Wake on clarinet. WEBSITE.

There are plenty of folk and country rock vibes from times gone by, on 'For You (My Blue Eyed Son)' a sumptuous and catchy affair. Whatever comparisons there might be for bands of old, this is fresh and beautiful, and thoroughly deserves the "timeless" seal of approval. 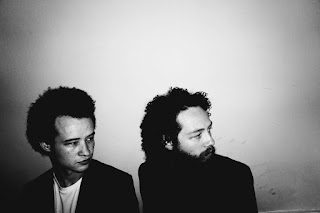 Background - The Mobros have shared a new video for their single, "Carrie Anne." “Who are we, and where do we go from here?” These were the questions on the minds of Kelly and Patrick Morris in late 2016. After bringing to an end a long but successful two and a half year tour, playing venues and music halls from small to large from coast to coast including festivals such as SXSW (twice), Midpoint Music Festival, Sweetwater 420 fest to name a few, and recording a live session with Daytrotter. Garnering new fans and attention from various press outlets along the way they averaged over 250 shows a year all in support of their 2014 debut release “Walking With A Different Stride.”

In the midst of it all, they found themselves coming to terms with the fact that they were not progressing in the ways they felt they needed to with their songwriting, and recording. Between being on the road and living in Chicago it was hard to find a permanent place to work and move forward with their music in the ways they wanted to do.

The brothers packed up and headed back to their home state of South Carolina to find a space conducive to living, writing, and recording without the limitations and pressures of time and money that commercial studios usually entail. They needed a home, somewhere to recuperate and hone the sound and conceptive direction they wanted to take with their next release. They found themselves looking in the city Charleston, SC, two hours south of their hometown of Camden, and a place they had spent some time between tours in 2014.

A year later they emerge with a collection of songs that embody the writing and production style developed during their time spent at “Leon’s Electric House.” These works follow suit with challenging the same questions they have asked themselves “Who are we, and Where do we go from here?” The first single off the upcoming release is entitled “Carrie Anne.” WEBSITE.

The video for 'Carrie Anne' is a good one as it adds some additional intrigue to the song. That said the song is just as good with eyes closed and taking in the fabulous vocals and refined rock backdrop. 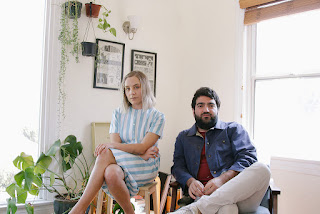 Background - Los Angeles-based Cape Weather released their new single "Never Say". This is the follow up to the bands first single "Telephono",  which received a great amount of blog love and major support from Spotify being added to almost every major Indie Playlist, as well as a video premiere with NPR Music a couple weeks ago.

The band is a collaboration between Natalie Smith and Eric Jackowitz. They’ve both played in bands for years; Eric playing drums for Nick Waterhouse, and Natalie bouncing around the Oakland scene while silently releasing music under solo monikers. After both feeling like it was time to make something their own, the two best friends who attended Berklee College of Music together decided to start writing songs over the internet while Eric was on tour with Waterhouse and thus Cape Weather was born.

"Never Say" encapsulates the simplicity of 60's pop, a nostalgic throwback whose vocal performance brings to mind Trish Keenan of Broadcast and teases their debut EP for Future Gods later this year. If interested, please feel free to reach out as we will be looking to place three more songs in the near future and obviously, we would love all the support we can get with this one. BANDCAMP.

'Never Say' is a lush and melodic dream pop type of song with some natural sixties feeling coursing throughout the piece. It's classy, addictive and deserves to be heard.