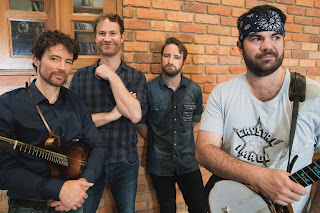 Mustered Courage - When We Played With Fire.

Background - Melbourne four-piece, Mustered Courage, have positioned themselves in the forefront of Australia's bluegrass genre. The Golden Guitar Award winning and ARIA nominated band are set to release their fourth studio album, and first new album since 2015 titled "We Played With Fire" due for release on in September. The single "When We Played With Fire" leads the album's release and is available for download now.

Remember back in the day? The old gang? Some of those memories are a bit hazy to say the least. Washed out in a combination of time and tonic. These days, with social media, it's easier than ever to do your own Where Are They Now segment on your old high school friends. Yet for some, no profile pic is necessary and the memory today is as vivid as it ever was. This is a song to one of those people. Those that we've loved and lost and the memories that remain. Young love and crazy teenagers and reminiscing on everything in between.

Having signed many record deals for their previous releases, Mustered Courage decided to stay independent with this album and were keen to involve fans in their recording venture, running a crowd funding campaign that raised over $15,000. "We are very proud to be independent again and more excited about our new album than ever before," says Guitarist Julian Abrahams.

Known for their energetic live shows, Mustered Courage will hit the road for a series of national tour dates to support the album's release from October 2018. WEBSITE.

Back in May we featured the track 'Run To Paradise' commenting that "this feisty and vibrant piece mixes some superb musicianship with natural sing along vocals, in a word, class." With the bands new music and video share for  'When We Played With Fire' they continue to impress. Sophisticated musicianship is clearly a hallmark of their sound, the vocals matching naturally, and the video confirming the commitment of Mustered Courage to produce superb music. 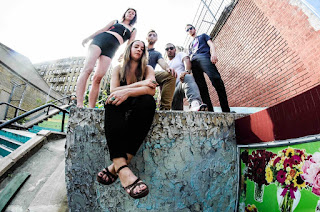 Background - “Gravity” is the second single that the Bronx-based experimental pop band Brooks Thomas are sharing ahead of the release of their new album Poison (out September 21st). “Gravity” is an emotional track about being stuck in a place that seems impossible to transcend, mentally or physically. In conjunction with the new single, the band has also announced their hometown album release show, which is taking place at Mercury Lounge on September 22nd (w/ support from Oliver Kennan, Pueblo and Miserable Chillers).

Brooks Thomas concocts unconventional hazy electronic R&B that's inspired by classic soul and artists like Dirty Projectors and Miguel - disparate influences that share a common thread: intensity of feeling. Exploring new ways to reach those emotional heights, producer Danny McDonald began programming beats and pushing their bassist Rocky Russo towards experimenting with pedals to change the textures, along with having their dual singers Colleen Cadogan and Arianne Lombardi create three-part harmonies that deviate from the standard 1-3-5.

What they recorded at home became a script for their live performances, where fresh colors and depths would be discovered as they translated the digital maelstrom into an organic setting. Those recordings would then get re-digitized, spliced together and warped as Danny reworked the production. Poison's opener "Fade In" for example, features the live recording of an old song Colleen wrote about Danny played backwards over a reversed saxophone sample. It ends with harmonies pulled from the penultimate song, "Gravity", unintelligible in their manipulations. All of it lives as a creative feedback loop, the recordings affecting the live show affecting the recordings.

Life was affecting the music too, of course, but not in a way Danny nor Colleen were conscious of. Though they weren't aware of it yet, these songs were about the end of their romantic relationship. Drugs and alcohol mixed with denial to shield the musicians from the truth of their own work. However, getting to share that dissolution with their bandmates in such intimate fashion has only strengthened them as a band. Together, Brooks Thomas has taken everything from their uptown world -- their helter-skelter neighborhood, the flowing alcohol, their sundry influences, the prolonged heartbreak -- and distilled it into Poison. WEBSITE.

'Gravity' opens with some understated synths, a varying beat and upfront vocals that are soon accompanied by complimentary harmonies. The song might not pick up pace, but the atmospheric vibes slowly unfold, and a brief refrain signals the moment for energy levels to up the mood and feeling.