February 16, 2019
We have to go back to March last year for our only other feature for Saltwater Sun, however their sprightly guitar sound, pleasing vocals and fresh rock feel is there in abundance on this fine new song. Emily Breeze mixes spoken word and song on 'Ego Death' a dark and brooding piece that is also very addictive, whilst the remixes take the track into some fascinating new dimensions. Fever High last graced our pages almost a year ago to the day, and their brand of vibrant Electro pop is again catchy, dynamic and hard to resist. 'Love Me If You Dare' is our second song share from Ghost Caravan whose refined music mixes subtle funk vibes, gorgeous vocals and a musical arrangement that is tight and polished. 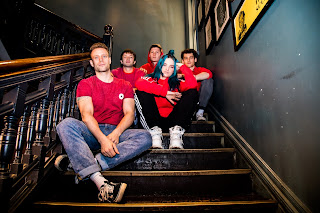 Punctured by explosive guitars and deftly fusing elements of shoegaze and indie with the edginess of garage rock, the quintet’s typically addictive latest effort follows their 2018 return with heavyweight singles The Wire and Hot Mess, and explores a much more personal element of their songwriting.

“Since the death of my father, I’ve come to know joy as sorrow-tinged throughout each altering epoch and mundane happiness in my life”, states frontwoman Jen Stearnes on the origins of the track. “With age, I mourn less for my loss and more for his, and so endeavor to carry his memory so that he might live on through me. It’s deeply personal, yet completely universal; Blood is about finding solace in the idea that we might transcend death through lineage”. 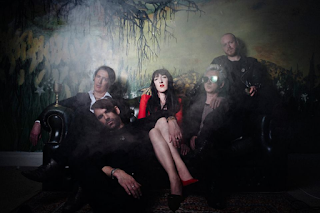 Seductive as it is cynical, “Ego Death” is a misanthropic fantasy inspired by Emily’s unsavoury internal monologue during her bus ride to work through the bowels of Bristol town centre to an industrial estate on the outskirts of the city. A departure from Breeze and band’s trademark lounge noir offerings, this song sees (Rob Norbury lead guitar, Andy Sutor drums, Duncan Fleming organ and Graham Dalzell bass) in full synth sleaze mode to offset Emily’s tragicomic lyrics such as “I drink a joyless cup of Gregg’s coffee” and “Today’s specials are ego death coupled with a side of nameless longing”. This is dysfunctional pop at its finest for the deranged, disillusioned and dishevelled, as glossy and menacing as Pulp and as smooth and as subversive as Serge Gainsbourg. 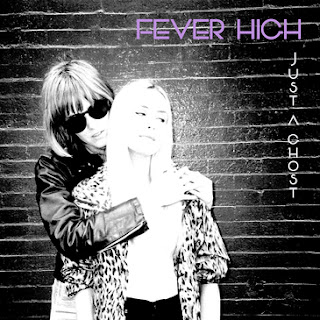 Brooklyn's Fever High released “Just a Ghost,” the latest single from their upcoming Avec You EP (out February 22).

“'Just a Ghost' is about the frights of bumping into an ex- a haunting figure that can pop up at any moment stirring up all the hurt and pain all over again. At first you try to dodge the ghost, but one day you face it and find that you've grown. That it no longer possesses the ability to hurt you anymore.”  - Anna Nordeen

The duo — multi-instrumentalists Reni Lane and Anna Nordeen — have found fans in places like Billboard, NPR Music, BlackBook, Bitch Media, The New York Times, The Guardian, and Interview Magazine who described the group’s sound as a “fizzy blast of electro-pop.” The Avec You EP also features production from Adam Schlesinger (Fountains of Wayne, Ivy) who produced the indie-pop duo’s 2017 album FHNY and their 2016 debut EP All Work. The EP’s title track was featured on Spotify’s New Music Friday and Indie Pop playlists upon release. 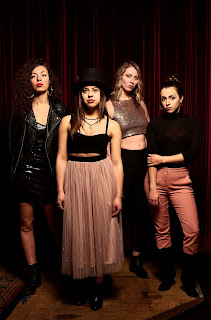 Ghost Caravan - Love Me If You Dare.

“Love Me If You Dare” is Ghost Caravan’s love letter to retro pop.

Says lead vocalist Shaina Silver-Baird, “I get to sing through the roller coaster ups-and-downs of falling for a new lover and the internal war between confidence and vulnerability, ego and doubt that is inherent in explosive love. It’s both a challenge (love me if you dare) and a plea (would you follow me?I would follow anywhere!). One of the things I love most about “Love Me If You Dare” is that, just like the emotions it represents, the track takes you on an unexpected journey; musical arrangements change and double back, beats alter, breaking your expectations. It’s somehow cool and fiery, groovy and experimental all at once.”

“Love Me If You Dare” was produced by Graham Stairs. Recording this song felt like a breeze. Despite it’s challenging nature, the band including Juliana Iannuzziello on keyboards, Michelle Faehrmann on five string electric cello and Sarah Riegler on drums and percussion has been playing it live off and on for a while now, so we already had a groove that we could sink into. The most challenging component was identifying and capturing the many layers; from two counterpoint bass parts to multiple layers of percussion and harmonies.

The song was co-written by Martha Johnson and Mark Gane of Martha and the Muffins who had a worldwide hit in the 80’s with the song Echo Beach and toured with Roxy Music. Three of their albums were co-produced by Daniel Lanois (Peter Gabriel/Brian Eno). The dance mix of another one of their songs, “Black Stations/White Stations,” was number 2 on the Billboard Dance Chart, only beaten out to the number 1 spot by “When Doves Cry” by Prince.