February 01, 2020
Barb Carbon shares 'Patience' a fresh sounding indie rock meets roots rock kind of song with plenty of hooks throughout. === Accompanied by a video filmed around the Palace of Versailles Nicolas Godin has just shared 'Catch Yourself Falling' featuring Alexis Taylor, a relaxing, melodic and smooth song. === Less than a month since her first appearance here Lilly Hiatt returns with another new song entitled 'P Town' a powerful and passionately delivered country rocker. === The Modern Society debut single 'Bad Thoughts' is an impressive affair, the young band packing passion and determination both musically and visually. === Malena Zavala returns to Beehive Candy for a third time with 'I'm Leaving Home' a beautiful song with the mixture of Anglo and Latin influences ensuring originality and subtle splendour once again.
------------------------------------------------------------------------------------------

Barb Carbon is an independent folk/roots-rock musical artist from Atlanta, Georgia, USA. She performs as a solo act, as well as with her musical partner, Arrie Bozeman, in the band The Ain’t Sisters.

Cutting her teeth as a traveling street performer before taking to the stage, she has spent the past 20 years honing her craft. Now, at long last, she is putting her music out into the world. Her influences are evidenced in her beautifully raw and gritty sound. Shades of Shovels and Rope, The Avett Brothers, and Lucinda Williams punctuate her melodies, while her earnest, inspired songwriting was clearly shaped by early encounters with The Indigo Girls and Brandi Carlile. Offering up a catalog of songs that are deeply personal yet refreshingly accessible, Carbon gives us a glimpse into her own experience and then artfully strips away the layers, exposing the nerve and laying her finger on the emotional essence of our shared struggles and hopes.

The Fighter (2019) is the first solo endeavor for the budding troubadour, but as a member of her main outfit, The Ain’t Sisters, Carbon has already begun her ascent. On the heels of their first record, Marrow (2018), the dynamic ensemble has experienced a regional surge, selling out Decatur, Georgia’s renowned Eddie’s Attic, Rattling the walls of Atlanta’s Terminal West, and sharing the stage with such acclaimed acts as Donna the Buffalo, Brad Parsons and Starbird, and Tank and the Bangas.

Garnering the attention of industry legends including Jim Lauderdale, Joe Craven, and Billy Gilmore (The Grass is Dead), the future is certainly bright for this up and coming artist. Keep an eye out for a sophomore effort from The Ain’t Sisters in 2020, and more solo offerings from Carbon in 2021. 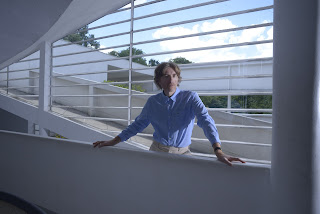 Following excellent reviews for his new album Concrete and Glass, out now via Because Music, Nicolas Godin has shared a beguiling video for “Catch Yourself Falling”, one of the standout tracks from the album, which features Alexis Taylor from Hot Chip on vocals. The video was filmed in the gardens and alleys Palace of Versailles and features a goofy young king roaming the gardens and generally surveying his kingdom. Of the video director Joseph Bird says: “I had heard Nicolas grew up in Versailles then all I could imagine when listening to the track is a young boy exploring the gardens of the Palace of Versailles, then to make him a young king with red hair sounded even better!”

In its soft ambient pulse and melting minimalism, lead track “The Border” is a perfect entry-point to Godin’s hymns to buildings, arranged and co-produced with Pierre Rousseau. Elsewhere, current single "The Foundation", which features guest vocals from Cola Boyy sees the Oxnard singer and activist brings soul to the righteously engaged track whilst the squelchy synths and buoyant grooves burn slow, allowing the stealthy arrangements and message room to resonate.

While Godin’s vocoder vocals also hark back to Air’s early work, the album accommodates a diverse spread of guest vocalists. Psychedelic soul singer Kadhja Bonet sings with measured serenity over tremulous synths on “We Forgot Love”, while Russian experi-pop artist Kate NV brings a gracefully aching romanticism to the blissful swoon-pop of “Back to Your Heart”. Additionally, Australian conceptual provocateur Kirin J Callinan contributes a vocal of restrained drama to “Time On My Hands”, a midnight-drift soft-pop ballad with a silky allure.

Between its title-track and the sultry, smoky jazz stylings of closer “Cité Radieuse”, Concrete and Glass is an album that truly travels, in tune with its global pitch. For Godin, it marks another milestone in a musical journey that began when Air’s 1998 debut album, Moon Safari, became the sublimely weightless soundtrack of its time. For Concrete and Glass, Godin builds on his storied past with tremendous finesse, charm and fluency, opening fresh windows of perspective at every lovingly executed turn. 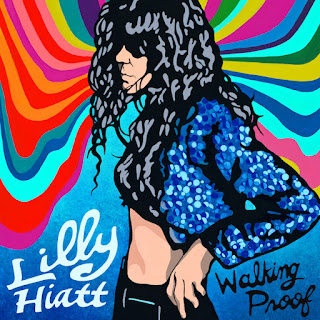 Lilly Hiatt is set to release Walking Proof on March 27th via New West Records. The 11-song set was produced by former Cage The Elephant member Lincoln Parish (Lucinda Williams, Lissie) and features guest appearances by Amanda Shires, Aaron Lee Tasjan, Luke Schneider, and Lilly’s father, the legendary singer-songwriter John Hiatt. John’s appearance on “Some Kind Of Drug,” marks the first time the pair have appeared together on one of her records. Walking Proof is the anticipated follow up to Lilly’s breakthrough Trinity Lane, which appeared on many year-end “Best Of 2017” lists including NPR Music, Rolling Stone, Paste Magazine, and more. Lilly also received an “Emerging Act of the Year” nomination from the Americana Music Association.

As rewarding as Trinity Lane’s success was, the collection came from an emotionally challenging place, and Lilly found herself frequently revisiting the hurt and struggle that inspired it as she spoke candidly to the press about her painful breakup, her struggles with sobriety, and the overwhelming sadness of her mother’s suicide. Rather than succumbing to the weight of it all, Lilly managed to emerge stronger and more serene from the experience, treating it as a foundation from which she could begin the essential work of re-examining her relationships and the world around her. “When I got that little gap in my schedule, it gave me the chance to appreciate some mental stillness,” Lilly says. “I can be a pretty anxious person, but I found a sense of peace by deconstructing all of these interactions and emotions I’d experienced and reconfiguring them into songs. It helped me make sense of everything and learn to relax.”

The resulting eleven songs found on Walking Proof walk the line between Lilly’s rough, rock and roll exterior and her tender, country roots, exuding a bold vulnerability as she takes a deep and unflinching look in the mirror. What emerges is a maturity in her writing, an abiding sense of calm in the face of chaos as she learns that sometimes, you have to let go in order to get what you want most. 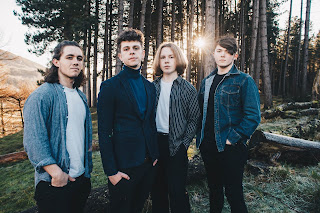 Debut single Bad Thoughts, which was produced by Simon Jones (The Verve), opens with subdued pomp before building to a rock chorus backed by vivacious guitars and singer Lucas’ gravelly vocals. Lyrically addressing the dangers of not discussing mental health, the track is backed by a poignant video shot by Cinframe Productions, which features varies guises of the band themselves. The band say;

“Bad Thoughts is about the importance of addressing poor mental health in the 21st century, trying to avoid the distraction from our mental states. The song is accompanied by visuals demonstrating the danger of suffering in silence and how quickly life can turn upside down.”

The Modern Society have been building their local following playing shows in and around Cheshire over the last year, including a recent show at Manchester’s Band on the Wall. They will be performing at the Tivoli in Buckley tonight and the Jacaranda Club in Liverpool on 28th February, with further live dates announced soon. The Modern Society are Lucas Humpheys (vocals & piano), Declan Fowles (drums), Jack Varah (guitar & backing vocals) and Connor Loman (bass guitar and backing vocals). 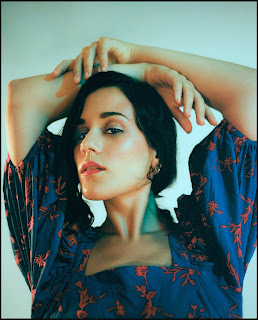 Malena Zavala has today released new single ‘I’m Leaving Home’, and details of her second album, ‘La Yarará’, to be released April 17 on Yucatan Records. Zavala will follow the release with a headline show at London’s Courtyard Theatre on April 23. The follow-up to her critically acclaimed 2018 debut ‘Aliso’, ‘La Yarará’ cements Zavala as a new Anglo-Latin talent, with a unique songwriting perspective on where she’s from, where she’s headed and where her music can take us.

When you’re born in Argentina to parents with Italian passports, then grow up from a young age in Hertfordshire, it’s easy to feel like an outsider. Who are you? Where are you from? What do you sound like? Spanish language, Latin culture, Home Counties – which is the most you? With the gloriously rich and transporting ‘La Yarará’, Malena Zavala has come home. A beautifully-wrought love letter to the culture in her DNA, its ten songs are vivid, vital hymns to the various aspects, colours and shades of Latin music and culture: cumbia, reggaeton, Afro-Cuban, Afro-funk, Andean folk, Argentine folk, bolero-son. And all sung, in a mixture of Spanish and English, in Zavala’s passport-to-paradise voice.

“When I started making music it was more about expressing my emotions, and learning to write and produce music myself,” she explains. “With my first album Aliso, I had to get something off my chest. But now with this second album, it was about exploring and overcoming my identity issues – about not knowing where I belong. That’s something I’ve felt my whole life.”

After the release of ‘Aliso’ – described as “gently warped and beguilingly melancholy guitar pop” by The Guardian in their 4 star review - Zavala toured all over Europe and the UK supporting Lord Huron, Blanco White, and Men I Trust, before hitting the festival circuit. She then spent three months writing her second album in Tarifa, the southernmost point of Spain.

Zavala and her close circle of collaborators recorded ‘La Yarará’ in two weeks last September at Urchin Studios in London Fields, with Zavala producing and Dani Bennett Spragg (Baxter Dury, The Amazons) engineering. “Urchin is a really beautiful, all wooden studio, which was really important for the sound of this album,” says Zavala. “I wanted it to feel like Buena Vista Social Club. I wanted to play the room, to feel the walls and wooden floors.” ‘I’m Leaving Home’ is out now and ‘La Yarará’ will be released on the April 17 on Yucatan Records.