Sun June share a new music video for 'Karen O' along with announcing their new album 'Somewhere' due next February. Karen O is a seductive, dreamy indie rock song with plenty of atmosphere. ===== Randell Bramblett has a forty year musical career and has worked with a good number of rock and blues finest artists. With a new album due next month he gives us a stylish yet natural rocker in the form of 'Rocket To Nowhere' to mull over ahead of the release. ===== Flor and the Sea recently shared a video for 'A Candid Lie' and it's a sumptuous indie, electro song that is gorgeously arranged. 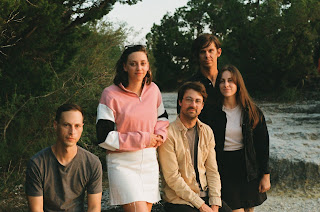 Austin indie-pop 5-piece Sun June have announced their new album Somewhere with a music video for "Karen O." The album will be released February 5, 2021 via Keeled Scales and Run For Cover.

Somewhere is Sun June at their most decadent, a richly diverse album which sees them exploring bright new corners with full hearts and wide eyes. Embracing a more pop-oriented sound the album consists of eleven beautiful new songs and is deliberately more collaborative and fully arranged: Laura played guitar for the first time; band members swapped instruments, and producer Danny Reisch helped flesh out layers of synth and percussion that provides a sweeping undercurrent to the whole thing.

They've called this album their 'prom' record; a sincere, alive-in-the-moment snapshot of the heady rush of love. "The prom idea started as a mood for us to arrange and shape the music to, which we hadn't done before," the band explains. " Prom isn't all rosy and perfect. The songs show you the crying in the bathroom, the fear of dancing, the joy of a kiss - all the highs and all the lows."

“ 'Karen O' is one of the only songs we've written that takes place over the course of a single night, and we hope we captured what it feels like when you're completely worn out but can't bring yourself to go home and go to sleep. It's about the kind of night you let heartache swallow you whole, and you find yourself heading straight toward the things you should be running away from. The actual Karen O is a hero of ours of course, and in the song, she spurs on a lonely night of reflection about what could be versus what can't. It covers some of our favorite topics-love, performance, regret, and hereditary drinking problems-and explores how we sometimes choose to heighten grief rather than reduce it. It also features a voicemail mailbox, which is unfortunate.

We shot the video out on a Texas Hill Country ranch with a spotlight ranchers use to check on cattle at night (very Texas of us). We thought the stage lights and disco ball helped draw out the connection between feeling an emotion and performing it, both for yourself and others. We got lucky and happened to shoot during a lightning storm, so we went full melodrama with it." 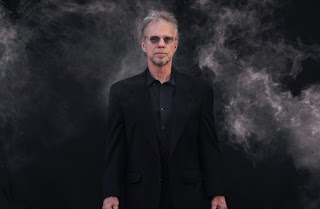 Randall Bramblett will release Pine Needle Fire on November 13th, 2020 via New West Records. The 12-song set was produced by Bramblett and Gerry Hansen and is the follow up to his acclaimed 2017 album Juke Joint At The Edge Of The World. In addition to his solo work over the course of his illustrious 40-plus-year career, Bramblett has recorded, performed and composed alongside rock luminaries like Gregg Allman, Bonnie Raitt, Steve Winwood, The Band’s Levon Helm, Widespread Panic, Marc Cohn, and more. With Pine Needle Fire, he recognizes a thread throughout its songs. Bramblett says it is “about time passing, or at least grappling with the realization that you don’t have an infinite amount of time left like you think you do when you’re young.

So there’s the mortality part of it. And then another part has to do with our current situation in this country. I grew up protesting in the ‘60s and ‘70s, so I’ve always felt connected to politics. Now I’m really hung up on it. And you look around and there’s a lot of people that are kind of desperate for change and for justice...or maybe they’re just desperate. They’re trying to hang on in this world. I’m one of them. Most of us are, to some degree.” These everyday people populate Pine Needle Fire, in which Bramblett provides a clear-eyed and engagingly detailed study of lives ordinary and unconventional, loves resilient and vanished and moments that have passed and are also yet to come.

Bramblett previously shared the album track “I’ve Got Faith In You,” calling the song “... genuine and trustworthy, a pierce of sunlight through those dark clouds we seem to be encountering all too often these days." “I’ve Got Faith In You” comes complete with something of a musical bonus: a slide-guitar melody performed on Duane Allman’s famous 1961/1962 Gibson SG. It’s the same one heard on the Allman Brothers’ legendary At Fillmore East and particularly famous for being the instrument played on the live recording of “Statesboro Blues.”

Bramblett said, “Pine Needle Fire is filled with people on their different journeys through life…experiencing loss, getting up before dawn to go to work, knowing time is running out, remembering lost love, hearing the wolf at the door and feeling lucky to be alive. Jason Slatton and I wrote ‘I’ve Got Faith in You’ several years ago. I thought it fit in nicely on the record as a voice of encouragement and support. We were able to borrow Duane Allman’s original Gibson SG for that session and my old friend, Tommy Talton, used it to play a beautiful slide guitar solo. Since Tommy knew Duane when they were both living in Macon, GA, using that guitar created a circle of sound and memory for us all. It helped capture the feeling of longing and hope that we needed to complete the record.” 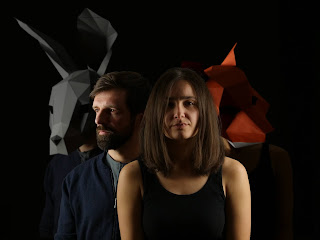 Flor and the Sea - A Candid Lie.

About Candid Lie - The video’s festival setting is a familiar and bittersweet sight to all music lovers in a time of global anxiety. Two masked characters (later revealed to be band members Marc Aretz and Chaem) cavort in the crowd, intercut with performance footage of Flor and the Sea onstage. It’s a contrast that highlights their tinderbox potential, realised sonically through their exemplary future pop sound on this standout track. The new wave atmospherics, vibrant and fluid guitar fills and unforgettable refrains reveal a band who have written the atmospheric foot stomper they set out to write. Produced at their Munich studio with the help of Dieter Dolezel and mixed by Moritz Enders at the hit-making Tritonus Studio in Berlin, Flor and the Sea have created a masterly indie pop anthem that radiates the joys of summer, freedom and untrammelled optimism.

About Kings & Queens - The songs of Flor and the Sea’s debut EP Kings & Queens invite their listeners to surrender themselves to the stream of music: to dream, to dance and to defy the world’s insistent tumult for a moment. Rich in stylistic fusion, pop elements meld with electronica references throughout their songwriting, inviting a host of esoteric influences from dubstep to synth pop to trap to join them. It’s a melting pot of style that recalls the work of Flume, Miike Snow or Alt-J. Co-produced by composer Dieter Dolezel and mixed by Moritz Enders (Casper, Kraftclub), the songs are a multidimensional exploration of sound. From the lilting, mythology-evoking arpeggios of ‘Arcadia’ to the propulsive electro ambience of ‘Dark Minds’, and the bleak dystopian piano keys chiming throughout ‘Reconnect’, Kings & Queens reveals a restless group with a unique musical chemistry, one not keen on travelling the same musical road twice.

Munich-based indie/electropop duo Flor and the Sea was originally founded in 2015 as a five-piece project. With the release of debut singles ‘Hold Your Breath’ and ‘Shed No Tear’, as well as bigger live gigs at Digital/Analog Festival and the Muffat Winterfest among others, the band generated a lot of buzz in short time and was featured as ‘Band of the Week’ by the Suddeutsche Zeitung/SZ Junge Leute in early 2017. After the band split up later that year, Marc Aretz (guitar/synth) and Chaem (vox) decided to keep Flor and the Sea alive as a duo. They redesigned their sound from scratch, incorporating influences from bands like Alt J, Radiohead and Portishead. The singles ‘Dark Minds’ and ‘Reconnect’ were birthed from the rubble and led to widespread acclaim, receiving regular airplay on radio stations like Ego-FM, Bayern 3, M94.5 and BR Puls, and landing positive reviews on international blogs like Composer's Toolbox and York Calling. Capping it all, the duo performed live on Radio Fritz ‘Live on Air’ for the first time. Alongside the production of their debut EP Kings & Queens, Flor and The Sea also resumed live performances in 2019 and put together an elaborate new program with their own light show, visuals, masks, and the support of additional live musicians. A first taste of this show was presented at renowned festivals Theatron Musiksommer and Sound of Munich Now in 2019.