French for Rabbits - The Overflow.

Surfacing nearly a decade ago from long oceanic shores, dream-pop luminaries French for Rabbits create music that feels like it has been crafted from the fabric of the New Zealand landscape and psyche – with its salty waves, isolated coastlines, expansive skies and friendly, approachable people. That is to say, their music is at once intimate and expansive, welcoming and wary, poetic but piercing. Emerging from a vibrant local folk scene alongside other idiosyncratic talents Marlon Williams, Aldous Harding, and Tiny Ruins, together the band have released three records - NZ Music Award nominated EP Claimed by the Sea; Spirits and 2019’s The Weight of Melted Snow.

They’ve toured in the US and Europe, opening for acts such as Lorde, Agnes Obel and performed at SXSW, Iceland Airwaves and WOMAD. Despite racking up millions of streams and seeing their music appear in shows from Vampire Diaries to Being Human, the band have remained close to their DIY roots co-running local label Home Alone, and performing in various other bands in their Wellington home-town.

New single ‘The Overflow’, the title-track from their upcoming LP, is their most immediate and compelling to date - the song is an optimistic take on anxiety and panic attacks - hopeful and soothing on the surface, with deep-seated fears close beneath. Frontwoman Brooke Singer is locked in a battle between head and heart as she seeks to rationalise the mechanics of a panic attack - yet, the song is weightless and optimistically bright in delivery.

“Nobody needs to hear about the admin of an indie musician, but I can tell you – it could be a mountain higher than Everest if you let it,” explains Singer. “At times, I’ve found myself on the edge of burn-out and having panic attacks…I dream of living in a cabin by a river, with a dog and fireplace and a simple life with friends around for dinner. But I’m also filled to the brim with ideas for projects, new songs and new challenges,” she continues, a tug of war familiar to many creatives. “It’s just a river, a current / it’s just a heartbeat out of time” she sings, lulling herself back to reality when her heart is racing. 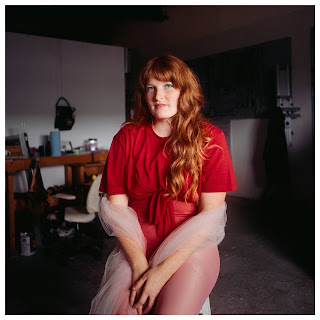 Jennah Barry is back with a new single, Venus In Heat, which like that LP, is produced by Colin Nealis (longtime Andy Shauf collaborator and bassist).

It's right in line with the groovy 70s-inspired acoustic pop of Holiday, with her vocals front and center as they should be.

Here's a quick quote from Jennah about the track: This song is about the first few days of falling in love, when you feel great and terrible all at the same time.

New Jersey native, London-dwelling artist, Baba Ali has today released his new single, "Thought Leader which trails previous tracks playlisted by BBC 6 Music and KCRW and tipped by Clash, NME, The Line of Best Fit and Paste. Premiered via Lauren Laverne on 6 Music, this latest single, which welds fuzzy guitars with a propulsive electronic beat, arrives as another installment of the forthcoming debut album, Memory Device that comes produced by Al Doyle (Hot Chip, LCD Soundsystem) and is out via Memphis Industries on August 27, 2021.

Baba says of "Thought Leader": “The demo started out really bare with this sampled Warsaw drum beat and an overdriven bass line I’d recorded while still in America. I sent it over to Nik in London at about 3 AM UK time and he sent loads of guitar takes back for me to work with like an hour later. It was quite clear the song had potential. When we finished off with Al, the song managed to not lose its more punk energy and influence, as Al was intent on not cleaning out any grit. An added bonus was having Al play live drums and bass on the recording, which let him get away from the desk and to get his hands dirty.."

"The self-directed music video for Thought Leader was made in collaboration with visual artist Dan Tombs (www.2ms.studio) , and took inspiration from the 1976 video work This Is a Television Receiver by British artist David Hall."

Air conditioning cleaning company in Al-Ahsa provides all the cleaning works and services for air conditioners, as it carries out complete and comprehensive cleaning of the air conditioner from the inside and outside, depending on the latest modern and advanced methods and methods.
شركة تنظيف مكيفات بالاحساء

There are a lot of people asking and looking for a specialized party in cleaning tanks, so we have provided you with a tank cleaning company in Al-Ahsa, tank cleaning services of all kinds.
شركة تنظيف خزانات بالاحساء


Al-Ahsa Insect Control Company is one of the first leading companies in the field of combating, attacking and exterminating insects, through its excellence and superiority in the control operations always everywhere and its superior ability to get rid of all kinds of insects, whether flying or crawling.
شركة مكافحة حشرات بالاحساء
شركة مكافحة الصراصير بالاحساء
شركة مكافحة النمل الابيض بالاحساء

A company that sprays pesticides in Al-Ahsa can combat any type of insects that haunt homes and cause anxiety, terror, tension and annoyance for the people of the house. and annihilated her on the spot.
شركة رش مبيدات بالاحساء
22 July 2021 at 12:26