Award-winning Psychedelic Rock/Dream Pop artist Aura Blaze continues his kaleidoscopic musical and philosophical evolution on the illuminating new 3-song EP "Open-Mindedness". Aura Blaze is the brainchild of New Jersey-based musician Rhode Rachel, who writes, records and produces everything. This EP, out on the auspicious day of December 24, contains two new originals as well as is a cover of The Charlatans (“The Only One I Know”).

About "Open-Mindedness" from the Artist: Featuring 3 tracks packed with blazing energy, neon color, and a swirling galaxy of texture and innovative sound design, I can say with confidence that the Open-Mindedness EP is one for the record books.

Let the cover art speak for itself as a glimpse into the atmosphere of this release, with the sanctity of transcendental introspection blossoming radiantly through what Aldous Huxley would refer to as the “mind’s antipodes,” or the regions of the mind that one may reach through intense meditation or psychedelic exploration. It is an honor to offer Open-Mindedness as an aural adjuvant towards a deeper discovery of self, acting as a cosmic catalyst for elevated consciousness.

Originally intended as an early summer release, the recording process has been met with no shortage of setbacks, including an external hard drive that decided to crash at a significantly inopportune time during production. Thankfully, I was able to revive the recording sessions and I am happy to finally bring this EP to life amidst the adversity that challenged its creation.

Between the aforementioned crisis, changing careers, and buying my first home, it has certainly been a busy and turbulent year but eternal doth the ardent spirit rise, breaching heights unimagined, in the direction of divinity made manifest.

Suffice it to say, the culmination of the conquering of these respective trials and tribulations have refined the essence of the Open-Mindedness EP, shaping it into the strongest Aura Blaze release to date with respect to both production value and unbridled aesthetic. I am overjoyed at the prospect of finally being able to share these tracks with you. I thank all of you for your continued support as well as your patience in the interim. Rest assured the wait shall be worth it. 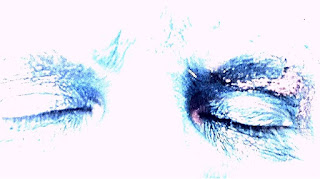 The first single off of Richard James Simpson's album "Sugar The Pill" is "Love Becomes a Stranger."  The song is filled with voluptuous strings, haunting, moody guitar, and lush vocals. The track is the last song on the album and it proposes the thought of love becoming a stranger in our world. It details a world of lying, guilt, distance, words not spoken, and the hope that love will ultimately not evaporate and leave us. The song features such musicians as Don Bolles on drums, who was in the seminal punk band The Germs; the exquisite string work from Katlin Wolfberg; bold bass by Wilton that brings to mind shades of Jaco Pastorius; all produced by Paul Roessler of The Screamers and Nina Hagen fame. Furthermore, the video features the outstanding ethereal and surreal footage from today's artist Grebo Gray.

This hypnotic album harkens back to such albums as David Bowie's 'Heroes', incorporating experimental vignettes and songs with efficacious, hard-hitting tracks reminiscent of such acts as Bauhaus, Killing Joke, Laura Nyro, Roxy Music, Siouxsie and The Banshees, and Radiohead.

While leaning toward the experimental side, these mood pieces are fashioned in the Euro-American style for which Simpson is known: "The Wizard of Oz meets Eno" as the iconic Geza X once described Simpson.

The theme of the album is NOW. It is about a loss of love, the losspop of freedom and humanity, charged with the intention of bringing a voice to an era that is ready to awaken and squelch any encroachment on the fight for human dignity and rights. As the artist puts it, "If you don't think something is wrong, it is time to find your mind".