With delicately plucked acoustic guitar and a vocal performance as pure and soulful as a Prairie sunrise, Lily Monaghan’s debut single “Sleeping Alone” heralds the arrival of a compelling new voice on the Canadian roots music scene. Based in Edmonton, Alberta, Lily has been building up to the release of her first EP, Introspection, in early 2023 by crafting songs such as “Sleeping Alone” in a manner that blurs the lines between folk, country, soul and pop. Working closely with producer Mark Maclure, with whom she was enrolled in MacEwan University’s music program, Lily experimented with several different musical approaches before finding the natural balance that brought out the most in her songwriting.

“I grew up listening to, practicing, and studying all types of music and I was really confused for the longest time about what genre I should commit to because I loved too many,” Lily says. “Even some of the first drafts of the tunes on this EP began as completely Pop-based because I believed audiences would like that the best. It took a lot of introspection, and it wasn’t until recently that I realized that Roots and Folk-inspired music is what feeds my soul and speaks to me the loudest, and the songs on this project are a reflection of that. I understand now that my versatility for other genres isn’t a weakness but a strength, and I intend to allow my knowledge for all styles of music to support me by bleeding into my writing and performing rather than setting me back by believing I must only choose one.”

Such self-awareness is certainly uncommon in such a young artist, and that’s reflected in Lily’s lyrics as well. On “Sleeping Alone,” a Taylor Swift-level breakup song, Lily sings, “I’m not a drinker but pour me a stiff one / I’m stuck in the ringer and no money’s enough / To look a dead man in the eyes before shooting him down.”

Other songs that will be on Introspection equally demonstrate Lily’s wise-beyond-her-years songwriting ability, the result of the influence that many of her favourite artists have had on her. “The songwriters that inspire me the most are those who make it evident that the craft is precious to them,” she says. “People like Gord Downie, Stevie Nicks and Florence Welch made a point to be eloquent and expressive through the use of literary devices and storytelling. Additionally, as a female vocalist I am also hugely inspired by strong and powerful female artists. Women such as Adele, Brittany Howard, Maggie Rogers and Miley Cyrus each have such different strengths and styles but they also set good examples on allowing yourself to musically evolve, grow, and experiment without limitations.” 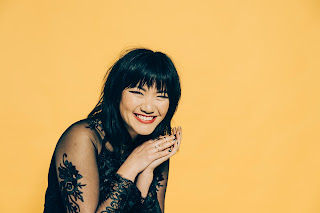 Nashville based singer / songwriter Ariel Bui has released “Sixteen”, the lead single from her forthcoming new album Real & Fantasy. The music of Ariel Bui, who Ann Powers of NPR Music once described as "a psychedelic cowgirl cool rockabilly queen”, pulls from her wide ranging musical background as a performer and music educator, blending elements of indie rock, country, soul, and psych rock into a distinct sound that should instantly appeal to fans of artists like Angel Olsen and Courtney Barnett. This album reunites Ariel with Grammy-nominated producer Andrija Tokic (Alabama Shakes, Hurray for the Riff Raff), with the entire new LP recorded at his Nashville studio, The Bomb Shelter.

“Sixteen” starts as a more straightforward coming of age indie rock song about “being sixteen years old, riding in the backs of cars and going to the beach, having crushes and first loves'', but that easy-going atmosphere acts as the trojan horse for the song’s undercurrent of deeper message. The opening line of the song, “I was just sixteen, you know what I mean,” is a play on the classic Beatles line, “She was just seventeen, you know what I mean”, a subtle but powerful tweak in perspective that subverts the innuendo of that Beatles lyric by placing it in a woman’s perspective, during the #metoo era no less.

The song’s chorus, centered around the line "I may be just a little girl / I have something to say", speaks both to the specific experience this song draws on of being a teenager first trying to earn respect in a male-dominated industry, and also a response to the way girls of all ages are oppressed or abused by men and society. “I was channeling my experiences of growing up a girl in a male-dominated scene and then going on to empower girls through music education at my music school Melodia Studio and Southern Girls Rock’n’Roll Camp,” Ariel says. You can really hear the way that today's teens and young women who “have something to say'' really inspired and re-invigorated Ariel. “Sixteen”, the opening track of Real & Fantasy, was the first song Ariel wrote for the album, and the track is uplifted by that female empowerment at its center, in a time when women's and humans' rights are as important as ever.